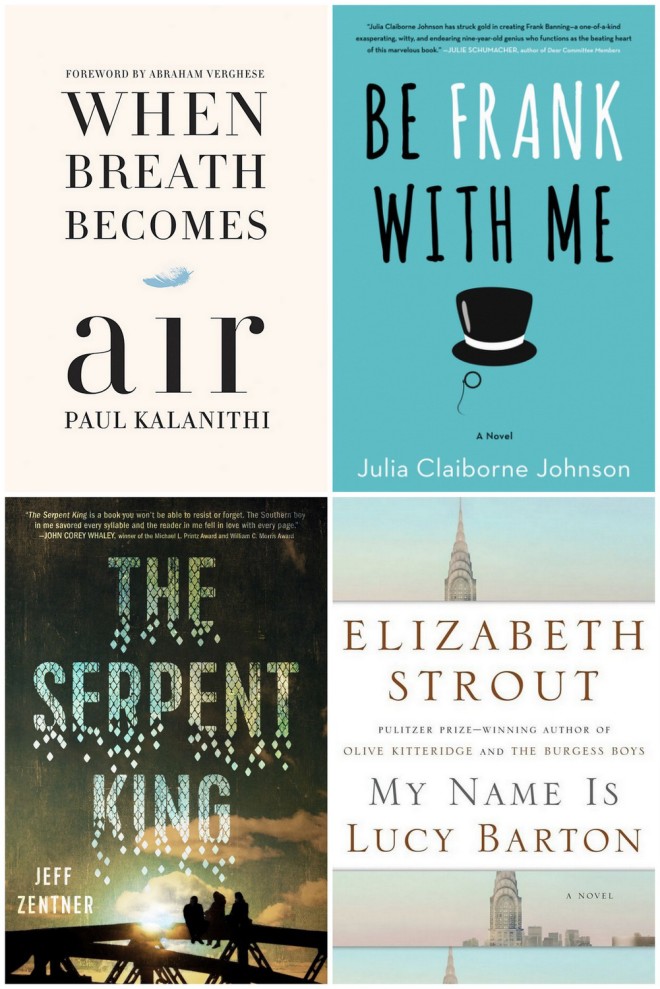 While whatever semblance of winter Los Angeles may have had this year is most definitely gone (and I'm not complaining), Aaron's recent travels through Milwaukee, Detroit, and Toronto can attest that winter is still alive and well in some places.  This post was originally scheduled for friday, but then we thought it our civic duty to give you enough time to prime these literary gems in case you happen to find yourself snuggling up inside this weekend.  Our resident book guru and writer, Gail Werner, is back today with six books you'll surely want to add to your nightstand.  Happy Weekend, friends!

When Breath Becomes Air by Paul Kalanithi: In the short time since I’ve read this book, I’ve recommended it to no fewer than a dozen people (and counting). The challenge comes when that friend or coworker says, “What’s it about?” and I have to describe it’s a memoir of a man who died of cancer. I watch their face fall as if to say, A death book? Oh man, Gail … I don’t think so. That’s when I start backpedaling, stealing the words of a reviewer who speaks of how Paul’s words in the book “crackle with life.” Because for as much as this is a memoir chronicling one man’s last days on earth, it’s a beautiful rumination on how he lived them with fortitude (a lesson all of us, living or dying, need to hear). If you read nothing else this winter, make it this book.

My Name is Lucy Barton by Elizabeth Strout: It’s been a few years since Strout (whose 2008 novel Olive Kitteridge won the Pulitzer Prize and is one of my favorite reads of recent memory) released a book. Which is probably why the publishing industry is fawning over her newest, My Name is Lucy Barton. In it Lucy, the novel’s protagonist, becomes hospitalized for nine weeks. During that time, she’s visited by her estranged mother and the two bond over conversations filled with hints and half-truths about their relationship. A friend of mine who loved it recommended it for anyone who loves Jenny Offill’s Dept. of Speculation. I haven’t picked it up yet, but look forward to recommending it to my book club.

The Serpent King by Jeff Zentner: An industry friend put this young adult read on my radar (“It made me bawl and laugh in equal measure,” as she described). With a review like that, how could I not add it to my to-read pile? Zentner is a Nashville-based musician turned author whose debut novel—which chronicles the lives of three friends on the cusp of adulthood, one of whom grew up the son of a Pentecostal snake-holding minister—is getting lots of buzz. For all you YA lovers, this promises to be a can’t-put-down read (one that would make a great gift for the teen in your life you’re secretly trying to impress).

Be Frank With Me by Julia Claiborne Johnson: When I first heard about this novel, it was from someone who described it in the same quirky vein as Maria Semple’s Where’d You Go, Bernadette. Recalling the laugh-out-loud moments I had reading that book was all it took to add Be Frank With Me to my Amazon wish list. Its story centers on Alice Whitley, a woman hired to help reclusive literary legend Mimi Banning write her first novel in years. Alice shows up at Mimi’s Bel Air mansion unprepared for the role she soon finds herself in: full-time companion of Frank, Mimi’s precocious nine-year-old. Maybe it’s because I love eccentric kids (that six-year-old in Jerry Maguire still gets me) but I’m really looking forward to this one!

The Girl in the Red Coat by Kate Hamer: Another year, another British writer, another book with “Girl” in the title—here we go again, right? But from everything I’ve read about Kate Hamer’s debut, this book promises to be its own kind of unique page-turner, a multiple-point-of view narrative about a young girl abducted by a man claiming to be her grandfather. I’m a parent so initially I had reservations about the subject material, but the promise of this book’s strong writing and unforgettable characters makes me want to clear my schedule and stay in all night to finish it.

The Swans of Fifth Avenue by Melanie Benjamin: I’ve read several of Benjamin’s novels and always finish impressed; historical fiction is certainly her forte. In her latest novel, she tackles the glamorous world of 1950s New York socialites and the friendship they strike up with legendary author Truman Capote. Growing up the nerdy kid I was, I used to look at images from Capote’s famous masked Black and White Ball (the social event of the century) and imagine what it would have been like to be there. Thanks to Benjamin, I’ll now get a front row seat.