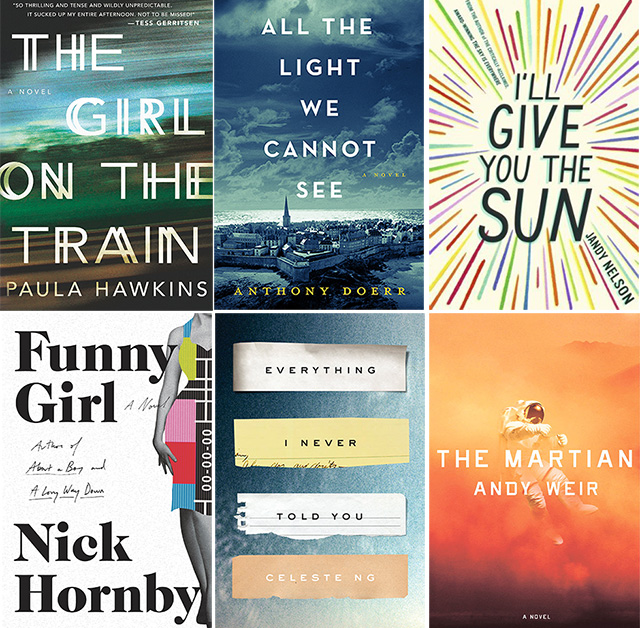 It may not be January, but I'm making a conscious effort to carve out more time for reading after checking out these recommendations from Gail!  She had me at "The hunt for the next Gone Girl has ended."  In the meantime, Parker and I are in Texas this weekend for a memorial service for my incredible grandfather that passed away a few short weeks ago.  His life would have made a great novel.  He took risks, chose adventure, and was as funny and kind as they come.  Since we will be spending the next few days catching up with family and friends I don't see many hours left for diving into one of these gems, but it's in my near future.  I'm going to make sure of it!  In the meantime, have you guys read any of these?  Dying to know what you think!  Have a great weekend, friends!

The Girl on the Train by Paula Hawkins: The hunt for the next Gone Girl has ended. Only instead of one unreliable female narrator a la Amy Dunne, Hawkins' gives us three--all great, all wanting something different and yet, in so many ways, the same thing. There is Rachel, the drunk who starts the story with her keen observations aboard her daily train into London; Megan, the woman Rachel sees from the train whose life she fantasizes about (though for reasons she'll soon discover, shouldn't); and Anna, the one who unites them, whose philandering gives her what she wants yet will burn her in the end. The Girl on the Train is a fast-paced thriller that'll keep you up late wanting to finish. Women feeling particularly anti-Valentine's should buy themselves a copy and make a date with this impossible-to-put-down read.

All The Light We Cannot See by Anthony Doerr: At first glance, this book seems a lot like homework. It's 544 pages, a hefty tome for even the most serious reader. But it's also literary fiction at its finest—the Book of the Moment that people can't stop buzzing about and with good reason. A World War II story, All The Light interweaves the lives of a young blind French girl (Marie Laure) with a teenage German solider/tinkerer (Werner), capturing their wartime experiences and moral struggles leading up to their suspenseful encounter on the Brittany coast. Read this not just for the gripping plot, but the beautiful way Doerr stitches words together, crafting sentences on every page that are just short of poetry.

I'll Give You the Sun by Jandy Nelson: This book's take on teenage life in the sun-drenched California world of twins Jude and Noah is another where the prose reads like mesmerizing poetry. Nelson's talent as a lyrical wordsmith is unparalleled and there were so many lines in I'll Give You the Sun that I loved, so many pages I dog-earred, that by the end my copy had nearly doubled in size. It's the story of love, loss, heartache and betrayal and it's a must read for all lovers of young adult fiction.

Funny Girl by Nick Hornby: Hornby is one of those authors whose work is a sure thing. What else do you expect from the man who wrote High Fidelity, Fever Pitch, and About a Boy? In his new novel, he turns his eye on 1960s London and the life of Barbara (soon to become Sophie Straw), a beauty queen desperate to relinquish her title for a break in the world of British sitcoms. Hornby's books are always dialogue heavy, making them read like film scripts in disguise. If you want something light for your next beach read, Funny Girl would make a great pick.

Everything I Never Told You by Celeste Ng: I love when an author's work leaves me spellbound—not just because of the story, but the style in which they've written it. Something about Ng's debut novel did this for me. It's the story of a Chinese American couple whose lives in 1970s small-town Ohio are rocked when a member of their family (their favorite child, Lydia) goes missing. Amazon picked Everything I Never Told You as its No. 1 read for 2014 and I can see why: Ng doesn't waste a word in this captivating character study that stays with you long after you've finished it.

The Martian by Andy Weir: With one heck of an epic first line, The Martian is a wild ride into outer space. It's centered on astronaut Mark Watney, one of the first people to walk on Mars who winds up getting left behind by his crew. Written by a self-described space geek, the book is heavy on science but promises plenty of humor with it (at least according to reviews; it's my next read from the stack of books towering on my nightstand!). It's also the title here that your significant other is most likely to pick up—a "survival thriller" with massive cross-genre appeal. Hollywood seems to think so too— the film (starring Matt Damon as Watney) is slated for a November 2015 release.

Want more of Gail’s recommendations?  Check out her summer and fall reading lists here and here.

« The Best Flats for Spring!
My Style // Capsule Wardrobe »