We are leaving for Stockholm in three days and I feel utterly unprepared.  When it comes to travel, I'm such a planner. You know the person that plans a three week trip to Europe with nothing but a backpack and a Eurail pass in hand? I'm the opposite. It's not that I need my days scheduled, but if there is a can't miss restaurant then I want to have a reservation and should we find ourselves in a particular neighborhood, I want to know what all of my options are for that area. (If you know anything about the enneagram, I sound like such a seven right now!)  It all boils down to wanting to make the most of an experience and not miss anything worthwhile. After all, when will we ever be back in Stockholm?! I finally started planning what I need to pack over the weekend and, thanks to these stellar book recommendations from Gail, I also narrowed down my Amazon order to just two books to take with me.  I'm going to call that a win and maybe just ask you guys to leave any Stockholm recommendations in the comments?!  Also, what are you guys reading right now? I recently got halfway through Eat Dirt (which I highly recommend) and now need to finish before we leave!  Keep reading for another one of Gail's unbeatable What To Read Now booklists... 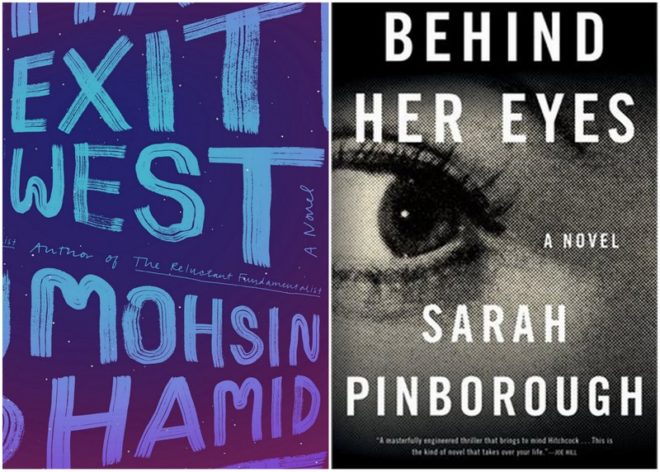 What to Read Now:

As soon as I heard about Min Jin Lee’s Pachinko, I fell hard for its gorgeous cover and was intrigued by its title. What is pachinko? Turns out it’s a game of chance that’s a cross between pinball and a slot machine (or Plinko, if you grew up a 'Price is Right' fan 😉 ). It’s also hugely popular in Japan and serves as the glue of this novel, a sweeping saga about members of a Korean family enduring the hardships of their nation being annexed by Japan during the 20th century.

What an eye-opening read this was. I had no idea the extent to which Koreans have historically been looked down upon by the Japanese. As a total sucker for a well-told family drama, I was immediately drawn into this book’s multi-generational storyline. If you like novels that read like contemporary classics (in the vein of Dickens or Tolstoy), you can’t go wrong with discovering the memorable characters of this harrowing yet beautiful read.

The Hate U Give

I couldn’t shake the feeling as I was reading Angie Thoma’s much-touted debut The Hate U Give that I was tearing through the pages of a book that would soon become required reading for every high schooler in America. Thomas tellings the gripping story of Starr Carter, a young black girl coping with the fallout of witnessing her best friend get shot and killed by a cop.

In the hands of a lesser writer—someone who didn’t know her subject as well or couldn’t tell the story with as much passion and insight—Hate might have turned readers off before buzz for it could build. Instead, I see it becoming the breakout book of 2017, a young adult novel that gifts readers a protagonist who isn’t just likable but empathetic in a way that makes you feel—no matter if you are black or white—a connection with this girl, her family, and her neighborhood in a way that will knock your socks off.

Who knew cartoons and comics would become the backbone of one of this year’s freshest readers? I devoured Kayla Rae Whitaker’s The Animators. It’s a page-turner about a female friendship defined by life’s surprises and I couldn’t get enough of the artistic partnership between the under confident Sharon Kisses and her in-your-face BFF Mel Vaught.

For this Midwesterner, The Animators offered an added benefit: After the novel’s first “No way!” plot twist, Whitaker, a Kentucky native, draws her characters back to Kisses’ rural Kentucky hometown. Living only five hours and some change up the interstate from where a lot of this portion of the book takes place, all of it (the people, the language they used, the food they ate) felt familiar in a context I don’t see often in contemporary fiction.

The New Yorker is already calling Mohsin Hamid’s Exit West a “novel about refugees that feels instantly canonical.” If that kind of high praise isn’t enough to sell you, then how about this book’s mind-bending geopolitical plot: a love story about Nadia and Saeed, a young couple forced to flee their war-torn country through … a series of magic doors. Curious now? I sure am. Exit West promises to be one of the most “of-the-moment” reads of what’s (already) shaping up to be a turbulent 2017. Here’s hoping its surreal premise can help readers like you and me better understand the refugee experience in a way so many news headlines cannot.

Lincoln in the Bardo

George Saunders is a critically-acclaimed writer who’s wonderfully weird. If you’ve read any collection of his short stories (Tenth of December is a good place to start), you already know this and it’s likely what you love about him. It’s also the reason why, when I heard he was writing his first novel, I was down for whatever it would be.

The end result is Lincoln in the Bardo, an other-worldly look at the true story of the night in 1862 when a young Willie Lincoln dies and his father, then-President Abraham Lincoln, visits his crypt. Saunders reveals the plot through quotes from historical documents (some real, some not) coupled with monologues from 100-plus ghost-like characters who, like Willie, are stuck in the “bardo”—a Tibetan state of post-life, pre-afterlife existence in-between.

I’ve been listening to Lincoln as an audiobook which is maybe the best way to discover it. Especially when you consider the star-studded line-up of celebrities—Nick Offerman, Rainn Wilson, David Sedaris, Lena Dunham, Don Cheadle and so many more—who lend their voices to the project.

While I know “Lincoln” won’t be for everyone, it’s one of the hottest novels of 2017 for good reason: It’s an absurdly original story that in its own surprising way leaves readers (this one at least) profoundly touched.

Behind Her Eyes may be the next thriller to keep you up all night. Written by British author Sarah Pinborough, this “grip-lit” read tells the story of single mom Louise, who’s stuck in a rut until a night out at the bar—and the kiss of a mysterious man—leaves her encouraged. Until the moment she realizes the man she’s falling for is her very married new boss, David.

What has so many readers buzzing about this book is the shocking twist that comes after Louise meets David’s wife, Adele. It’s a premise that sounds like a must-read for anybody who loved The Girl on the Train (me! me! me!) and with the promise of a to-die-for ending, it’s sure to be the kind of read you’ll want to talk about with somebody—be it your best friend, your mom, or the next gathering of your book club.

What to Read Now Book Recommendations by Gail Werner

(For more of Gail's great book reviews and recommendations, see the full What to Read Now series here!)