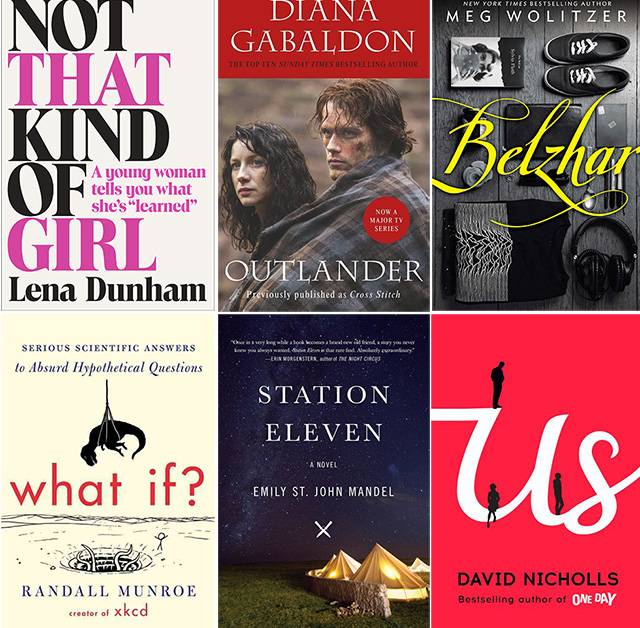 Sometimes in life it really is the little things.  When we moved into our place three years ago, Aaron and I did what every proper adult does when they buy their first home and bought a king-size bed.  I'm not in the habit of ranking purchases and possessions but it's definitely towards the top of the list in terms of my love and sheer attachment for it.  Once we had the bed that dreams are made of, I installed these really cool swing arm pendant lights with 1890s style single filament bulbs.  They look really great.  They illuminate absolutely nothing.  We could probably sleep with them on and not notice.  Why am I telling you about my bedroom pendant light situation?  Because this reading list by Gail got me so excited that I promptly Amazon primed two books and switched out the bulbs next to my bed for the unsightly ones that are one notch away from a flood light so that I can spend my evenings reading before bed again without having to get up and turn off the light.  So without further ado, friends, double check those bulbs and go find these books.  You'll be glad you did!

Not That Kind of Girl by Lena Dunham: Confession: I've never watched Girls but I am intrigued by its star and creator, Lena Dunham. I've read enough positive reviews to want to pick up her much-touted collection of essays about the struggles of growing up, written in the vein of David Sedaris and Tina Fey. Before I do, I plan to dive in to another new book of essays: Roxanne Gay's Bad Feminist. Together, Gay and Dunham are making headlines for their witty takes on what it means to be female in the 21st century. That both are doing so in a way encouraging women to be themselves (flaws and all) is all the more reason to discover their work.

Outlander by Diana Gabaldon: Great hot Scot, have I gotten hooked on Outlander! The novel is the first in a series focusing on 20th-century nurse Claire Randall, who time travels to 18th-century Scotland and finds adventure and romance with dashing Highlander Jamie Fraser. The book is 20-plus years old, but its popularity was renewed over the summer with cable network Starz' adaptation of the series. Last month, I devoured all 850 of its pages then employed the same zeal to binge watching the TV show. It's in mid-season hiatus until April, making now the perfect time to catch up. (Fact: Sam Heughan as Jamie Frasier is the sex symbol of 2014. Seriously.)

Belzhar by Meg Wolitzer: I became a big fan of Wolitzer's after the 2013 release of her adult novel, The Interestings. This fall, she's back with her newest work, a young adult novel focusing on a group of emotionally fragile students who attend a New England boarding school and bond over a "Special Topics in English" course that explores Sylvia Plath's seminal The Bell Jar. I downloaded the first few chapters of Belzhar and, swept up by them as I was, it wasn't long before I was tapping "BUY" to lose myself in the rest of this incredible book.

What If? by Randall Munroe: Sometimes you want to read a book that will make for great dinner party conversation. This season, that book is What If: Serious Scientific Answers to Absurd Hypothetical Question by Munroe, a web comic artist, former NASA roboticist, and all-around curious guy. In it, Munroe tackles absurd scientific questions (like, "What if the sun turned off one day?" and "What if you could drain all the water from the oceans?") with the same humor and intelligence that have made him a cult icon for nerds all over the world.

Station Eleven by Emily St. John Mandel: Every year there's a literary novel that becomes The Book You Must Read. This fall, that book is David Mitchell's The Bone Clocks. But coming in a close second may be newcomer St. John Mandel's post-apocalyptic tale in which a flu wipes out most of civilization, leaving behind small bands of people to fend for themselves, like the caravan of performers (The Traveling Symphony) at the heart of this vivid nonlinear story.

Us by David Nicholls: This (along with Amy Poehler's Yes Please) is my soft-spot read for fall. Back in 2010, while my husband and I vacationed in the UK, I discovered Nicholls' One Day. I couldn't read it fast enough and once we were back home, thrust it into the hands of all my friends. (Sadly, I didn't love the film adaptation the same way.) Five years later, Nicholls is back with his newest, exploring the bonds of marriage through the story of a man trying to scheme up a plan to hold on to his wife while the two, accompanied by their teenage son, spend their summer touring Europe. If you're a Nick Hornby fan, you'll love Nicholls too.