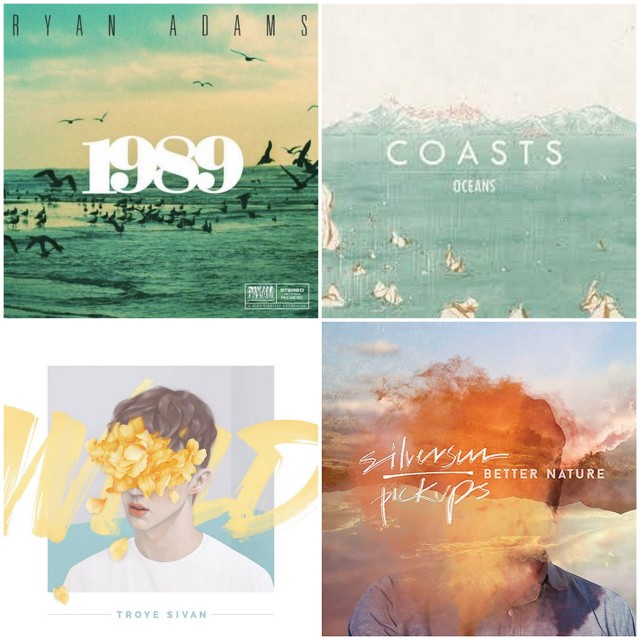 I seriously can't imagine a single reason not to love October.  The leaves may not be changing nor the weather cooling yet here in Los Angeles, but that won't stop the onslaught of pumpkin infused bites and beverages that will make their way to my belly, so all is still well in the world.  We have been shooting non-stop this week, so I am looking forward to a little weekend relaxation before Parker and I hop a plane to Austin Monday for another styling job and possibly some cooler weather-- fingers crossed!  Speaking of crossing your fingers, I never used to be one to worry about traveling solo with a baby, but now that said baby is a toddler I have some uneasiness about the pending flight.  Here's hoping that she takes a very long nap and I can zone out and listen to this stellar playlist from the one and only, music supervisor extraordinaire, Matt Mugford.  Happy October, friends!

Ryan Adams - Style
If you haven't heard about the Ryan Adams 1989 cover album by now, we can't be friends (and where have you been??). I considered just putting the entire thing on this playlist with nothing else because it's that good. So listen to this and then go listen to that. Let it be known that Ryan Adams is my all time fav so I may get a little over excited about these things, but it really is great. Also, the heavy transition sections are so great in this. Ok, I'm done.

Sia - Alive
Written with Adele and Tobias Jesso Jr. So in theory it was written for Adele's new album (coming soon??) and WASN'T GOOD ENOUGH?? If that is true, then we should all be getting ready for some serious life change when that thing drops.

Troye Sivan ft. BROODS - EASE
Love Broods, and this Troye fella ain't so bad either. Put them together and you've got a pretty good thing going.

Coasts - Ocean
Surely I put this on a mix already, right? That's what I thought, but I don't think I have! Horray...seems appropriate since it's still in the 90s here in sunny LA. Also seems appropriate for a band called Coasts to have a song called Ocean.

Polyenso - 17 New Years
I don't know what a Polyenso is, but I'm in love with this band. Their new album, which isn't out quite yet is so so great. Very Thom Yorke-y and that's always an interesting comparison.

CHVRCHES - Make Them Gold
The new CHVRCHES album is AMAZING! Go listen to it right after you get tired of 1989. If this song doesn't make you feel good about yourself, then you need to listen to it whilst eating an ice cream or something.

Big Grams - Lights On
I didn't know what Big Grams was, but it all sounded so familiar. I looked into it, and it's Phantogram and Big Boi! Which is genius. The songs they did together on Big Boi's last solo record were so amazing. Big fan of this.

Silversun Pickups - Pins And Needles
I've never been a huge fan of this band for some reason, but their new album is quite nice. Also, they got their name from a liquor store that was around the corner from my old house, so that's cool.

FIDLAR - West Coast
This is about as punk rock as I get. Feels good.

Ryan Adams - All You Had To Do Was Stay
SORRY! I couldn't resist. Just one more! Btw, this IS a Ryan Adams song, right?? Geeze..