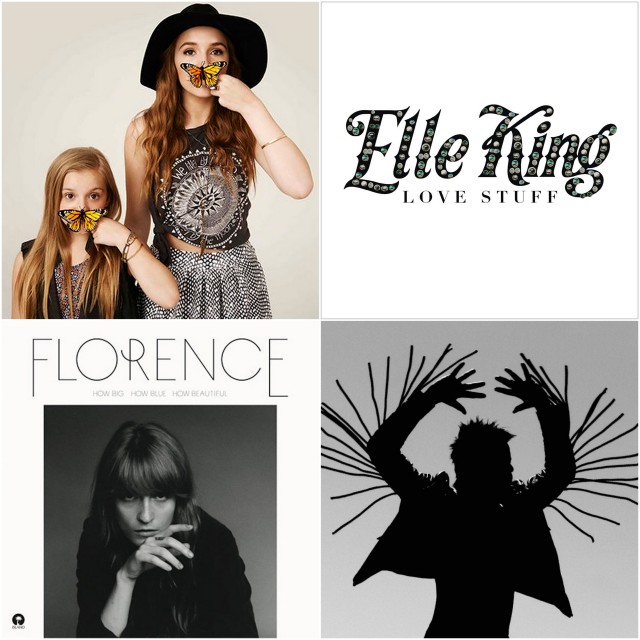 There is a strong likelihood that it hasn't crossed your mind yet that today marks just two months until my favorite holiday, Cinco de Mayo.  You're welcome for bringing that to your attention.  Yesterday, on the other hand,  marked the day that my tiny little babe turned 11 months old which has me in full-blown first birthday party planning mode.  So far the party is a Minnie Mouse theme with strong Cinco de Mayo undertones.  (Yes it does sound just as crazy to me as it does to you, but who doesn't love margaritas, a taco man, and a visit from a beloved Disney character?)  I'm totally getting ahead of myself, though.  This is March and March has just as much to offer us.  Apparently baseball begins this month, I think, so yay baseball!  Plus, there's spring break.  Who doesn't love spring break?  And, thanks to Matt Mugford, there is also this playlist that you can listen to for the next 26 days... which might actually be my personal favorite thing about March so far.

I love that this band is popular. Not sure if you caught their SNL performance last week, but it was ridiculous. Brittany Howard is so rad.

MisterWives - Our Own House

A little bit of a flavor of the moment, but you can't deny this chorus. The horns are locked in.

I really love the arrangement on this track... super cool/indie intro/verse, piano ballad pre-chorus, anthemic chorus. Not your typical road map, but maybe it should be.

I might get crap for putting this on here, but I don't care. I am obsessed with this cover. The live version on YouTube is best: http://youtu.be/X6f1yACIoNY. I hope the younger sister (not sure which one that is) isn't too old for my son someday (is that creepy?).

This song has been on repeat lately. It's just too easy.

"So beat the drum with me!"

Florence + The Machine - What Kind Of Man

I go back and forth on Florence and this song and the whole thing...but there is something undeniable about her. When the guitar kicks in and her vocal goes all Florenc-y, it's just beyond anything anyone else can do.

Laura Welsh - Breathe Me In

Still trying to figure out the time signature of this one. Any music theory nerds out there care to chime in?

EXGF - We Are The Hearts

Someone's been listening to Lana, and I'm ok with it.

In honor of Beck winning the Grammy for Album Of The Year (sorry Kanye), this is my favorite Beck song of all time. I know there are a lot to choose from, and probably much more popular choices, but this is the one for me. When I first heard it, I didn't know who it was and it began an immediate search for it (this was before Shazam). Once I discovered it was Beck I was pretty surprised. I didn't realize he was capable of such a trippy psychedelic jam with the most frantic drum track I had ever heard. I guess I shouldn't have underestimated the power of Beck.

Having trouble listening?  Try this link.

We are so grateful to Matt for putting together these monthly playlists for our listening pleasure.  If you're not familiar with him, his music supervision work has won Grammys and been featured on some of your favorite tv shows and commercials.  He currently resides with Disney.  For more of Matt, follow along here and here!