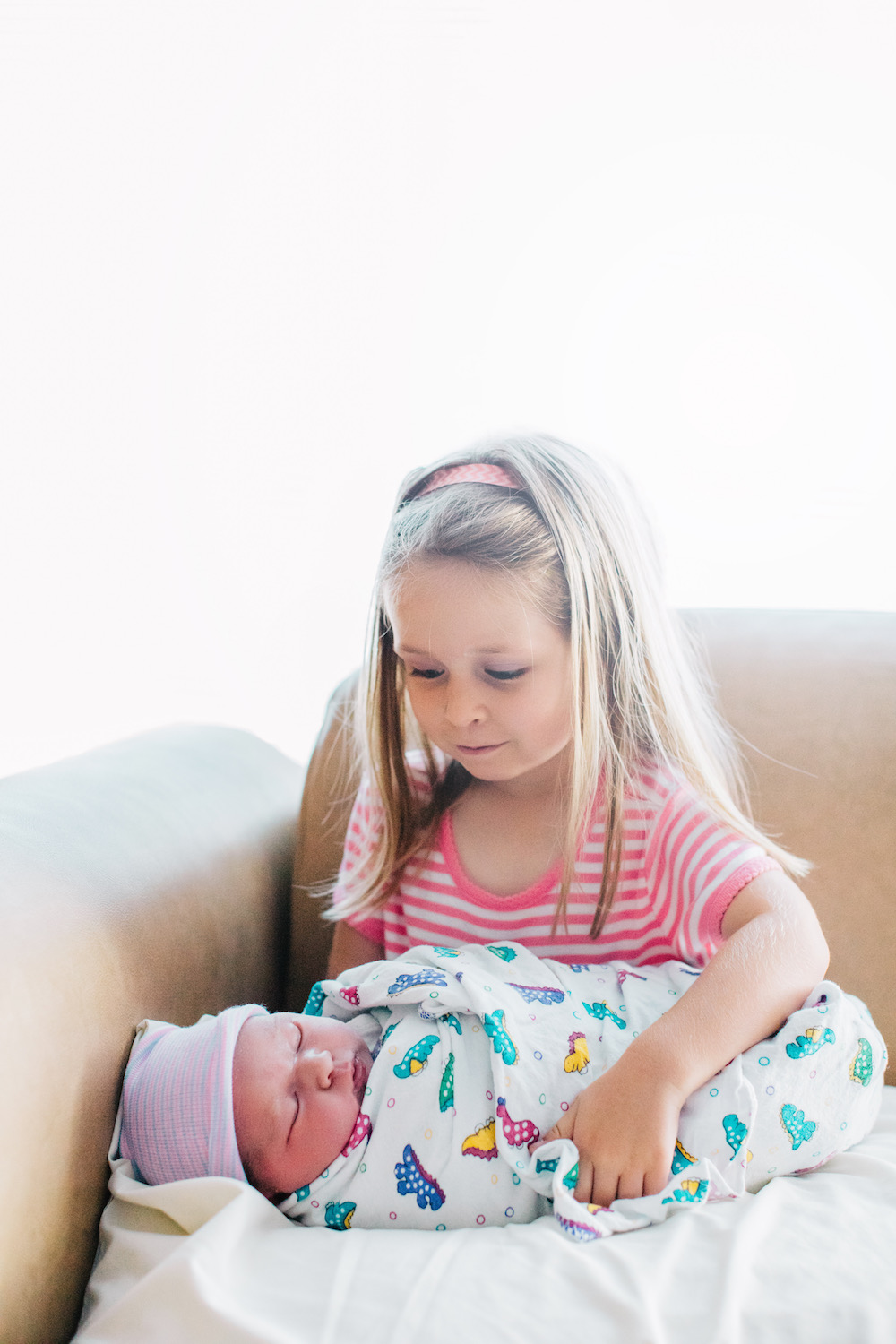 I’m one of the three sisters, so there was never any doubt for me that these two girls I would call mine would come along with their own long list of differences, just as the three of us had.  Would she have Parker’s thick, moppy hair at birth? Would she join her sister in the nine pounder club?  Would she come into this world on her own or would she have to be coaxed out by modern medicine like her big sis?  After months of waiting, wondering, and eagerly anticipating our newest family member, we finally met her face to face early Wednesday morning at 1:46am. This, friends, is the very true story of an almost unintended home birth and how I showed up to the hospital without pants or shoes on.  One that I wasn't sure I was going to post or not, but I certainly don't want to forget it, so here it is, forever written in blog history: The story of how we met our second baby girl, face to face. 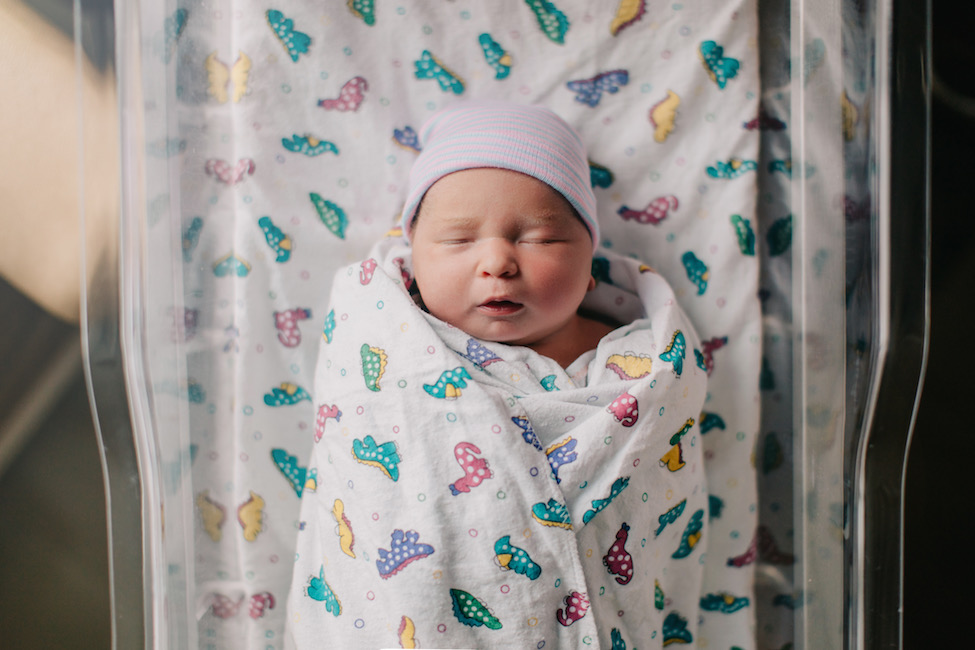 I had been contracting for months with this pregnancy.  I had with Parker, too, but these would come on in consistent bouts tempting me to time them with their regularity and wondering about their seriousness.  One such bout of hours on end contractions that were a minute long and less than 3 minutes apart landed me in triage at 34 weeks and 3days.  A few bags of fluid and some “anti-contraction” meds later (my laymens term) I went home with instructions to take it easy until we could get this babe to 37 weeks, instilling in me the idea that she would most certainly be early. (Something I was not opposed to, assuming we could get her to 37 weeks.)

37 weeks came. Then 38. Followed by 39.  It seemed she was cozier than we all expected and my impatience and lack of control in the whole situation became increasingly clear with each passing 100 degree day.  I tried acupuncture, pineapple, spicy food, and just about everything else anyone suggested.  On Monday I was 39 weeks and 5 days and had been having contractions all day.  A couple times I timed them.  Seven minutes apart. Six minutes apart.  By the late evening they were four minutes apart and I was tempted to call my mom to come from Georgetown to stay with Parker, but still uncertain if this was “it”.  I went to sleep that night and was more than mildly disappointed every time I awoke with nothing more than the sense of an urgency to pee, yet again.  Tuesday morning came and with it, no contractions. By 11am they were back and very strong but never consistent.  It remained this way most of the day. This time I refused to time them, despite their growing intensity and, in hindsight, the fact that I was breathing through them by evening.  I had decided that when they were real contractions I would just know, because clearly my body didn’t adhere to the one minute contractions, five minutes apart for one hour rule to know that you were in labor.  I went to sleep at 10:30 that night and woke up at the 12:40 with a really strong contraction.  I went to the bathroom and climbed back in bed and fell asleep.  A few minutes later another contraction. This time I got out of bed and paced around in the living room a bit. The next contraction came and I found myself holding onto the dryer and thinking about an epidural, something I wasn't sure I wanted with this delivery. I texted my sister who is also the Nurse Practitioner for my Obstetrician (who is also my sister-in-law) at 12:56am “I think I am going to wake up Aaron soon. Having really painful contractions that are almost two minutes long and only three minutes apart.” I had no idea when I sent this text that I would have a baby in my arms 50 minutes later. 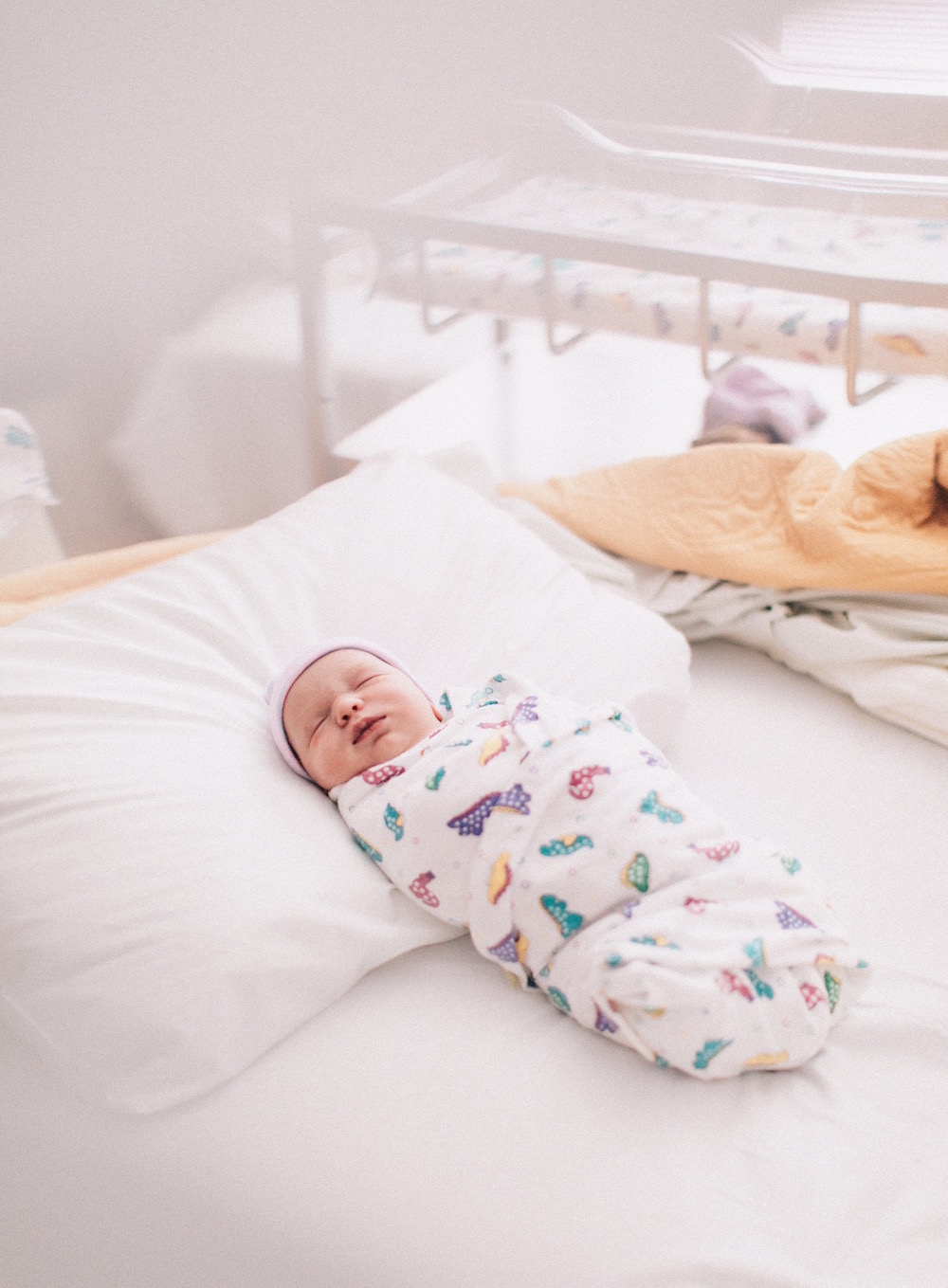 I woke up Aaron, telling him very calmly that “I think we are going to need to go to the hospital soon.”  I walked out of the bedroom and still second guessed whether I was in real labor.  Maybe I shouldn’t have woken him up? Three minutes later my water broke while he was upstairs packing up Parker’s things—the only person we hadn’t thought to pack for prior.  (Luckily, I had this Duckworth bag that comes basically pre-packed with essentials and I had added a few more necessities to it the day before when I thought I was in labor.) When he came down, with plans to get a quick shower and pack up his cold brew coffee for the morning, I was on the ground in our dining room pretty sure that I was about to have a baby on our floor.  “We need to go now!” My sister-in-law went ahead to the hospital to meet us.  There was no time to take Parker anywhere or wait for someone to come over so we packed her up with us, too.  She was oblivious to any of the chaos and so excited that baby sister was coming!  I was still on the ground, with contractions on top of each other, not knowing how I could make it to the car as Aaron loaded her in her carseat. When there was finally a rare break from contractions, I ran for the car in my tee shirt and underwear, no pants or shoes. No awareness whatsoever that I had just left the house without pants or shoes. 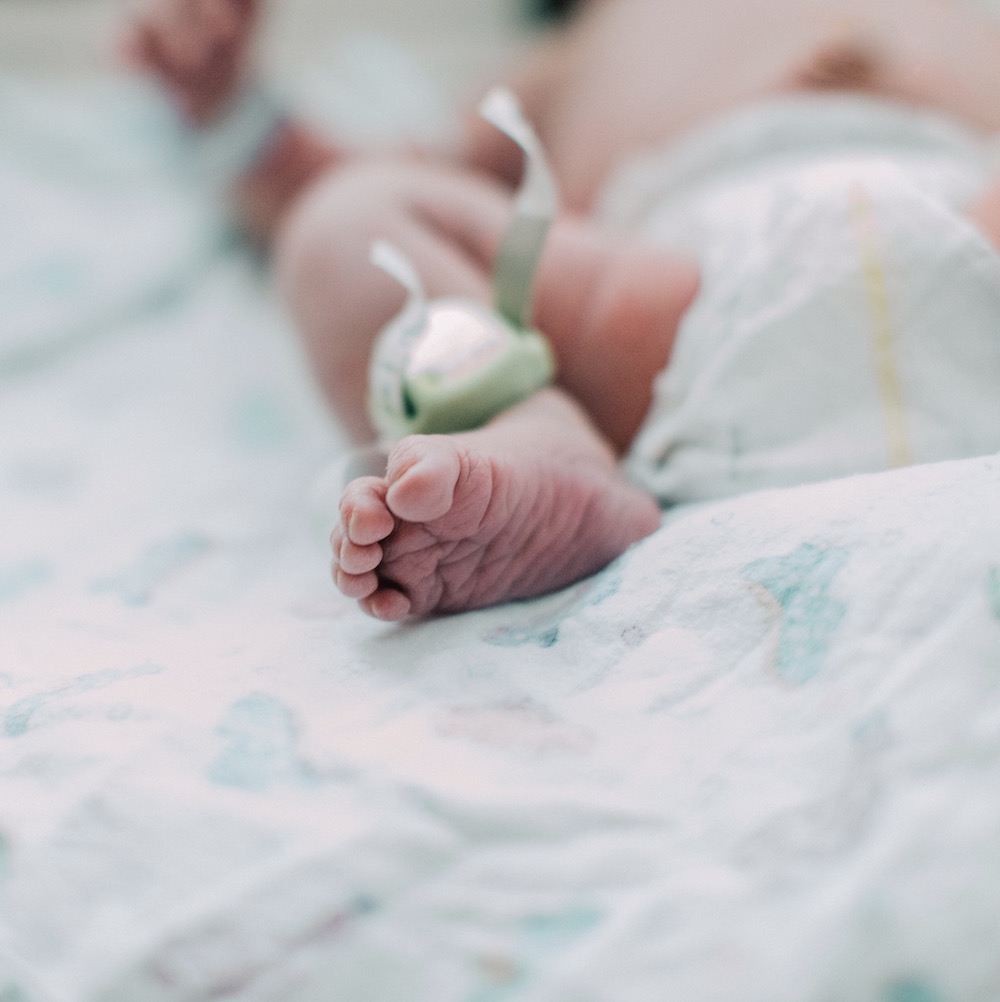 My sister was waiting in the driveway and we followed her to the hospital.  On the ride there, I did my best not to yell or scream, afraid I was totally freaking Parker out.  We safely proceeded through red lights and were certainly driving well above the highway speed limit.  Luckily it was empty this time of night. We passed a yellow car that’s mounted on top of a building that we pass every day for school and Parker pointed it out, delighted and so unaware of what was going on.  We passed her favorite hamburger drive thru. More excitement.  I gripped the center console of the car and the handle of the door and tried hard to ignore the sensation that I needed to push.  My doctor was waiting for us at the entrance of the hospital with a wheelchair. My sister took Parker. My doctor took me.  I still had no pants or shoes on.  This was 1:25am.  45 minutes since I first awoke with a contraction.  We went straight upstairs into the room.  I begged for an epidural, knowing already we were way passed that.  “She will be here in three pushes. You can do this.”  I screamed.  I shut my eyes. I crawled up the bed before being coaxed back down.  But finally a push with no scream and a baby in my arms. A gooey, chubby, screaming baby, cord attached that I had been waiting nine months to meet. It was 1:46am.  I watched Aaron cut the cord as she lay on my stomach.  Parker took nearly 38 hours of laboring.  This little bug barely made it to the hospital in time.  She was 8 pounds, 15 ounces and 22 inches long, born spontaneously on her due date. 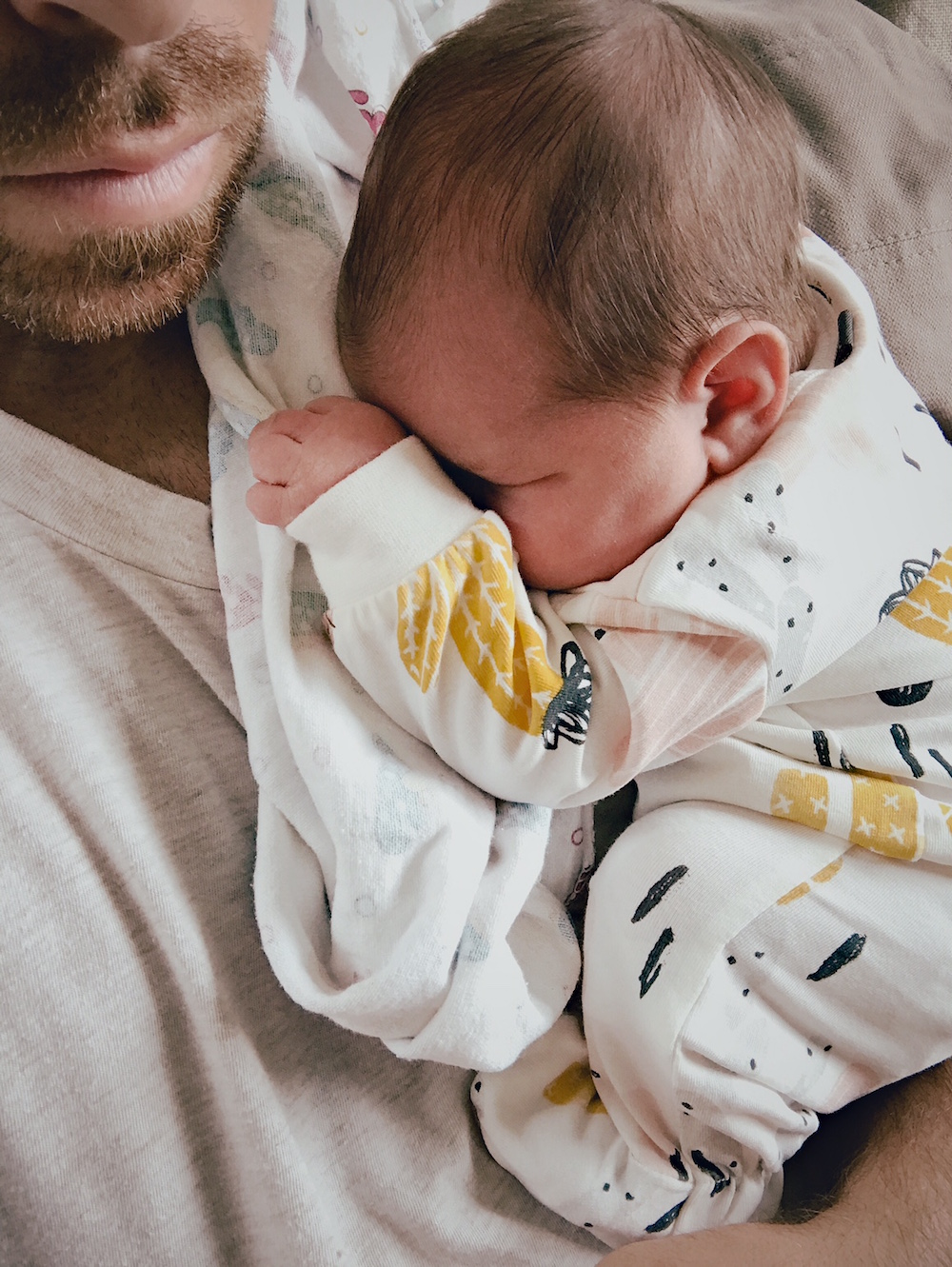 We went to our recovery room. I played over in my head what had just happened for the next few hours.  If we had still lived in LA, I surely would have never made it to the hospital.  How grateful I was to have my sister in law as my doctor, ready for us when we arrived at the hospital. (She’s amazing in general, even if she isn't your sister-in-law.  Her name is Dr. Capet and she’s part of Austin Area OB-Gyn if you’re looking for someone!)  In hindsight how glad I was that it was too late for the epidural I was begging for.  But mostly just how happy and how grateful I was (and am) to be a mom of two wonderful, healthy girls.

We made it home just in time for Hurricane Harvey to knock out our power and have been without it for the last 48 hours, so we are slumber partying in my sister's guest house for the foreseeable, powerless future, snuggling and nursing and doing our best to keep up with real life, too, but certainly failing at it a bit.  We are home (kind of) and we are four now and so, so happy.  Welcome to our family, Ever. We are so glad that you are ours!