I'm so glad to be continuing our Real Talk with Real Moms series today!  We reluctantly decided to take a break in November and December due to holiday craziness, but I have been really looking forward to reading everyone's posts on this subject in particular.  I'm not sure there is another topic more poignant in motherhood than working and childcare.  Just about all kids will outgrow sleep problems and feeding them will become a totally mindless act in the majority of cases, but choosing whether or not to have a career outside of your home and then doing whatever it takes to make sure that your babies are best taken care of if you're away is a battle that lasts for years.  Perhaps even all 18 of them?  To work or not to work?  It seems like that's supposed to be the question, but it really wasn't even a question for me.  I love my job as a wardrobe stylist and also as a content creator.  I also love being a mom to Parker and love that we live in a world now where I don't have to choose between one or the other.  Almost all of my girl friends that I have here in LA still work as well.  I think it could have a lot to do with living in a city like Los Angeles where the cost of living is so high.  It's a lot more challenging to live off of one income. I also think that the age you are at when you start having kids can play a big part.  I think it's easier to continue working when you have already established a career for yourself than when you are still in those initial few years of charting your path.  Choosing to continue working after having Parker wasn't a challenge, but choosing what hours to keep, which jobs to take, and choosing the best childcare for her has definitely been a lesson of trial and error.  Here's how we approached it in the beginning, what didn't work for us then, what we are doing now, and what our daily/weekly schedule looks like: 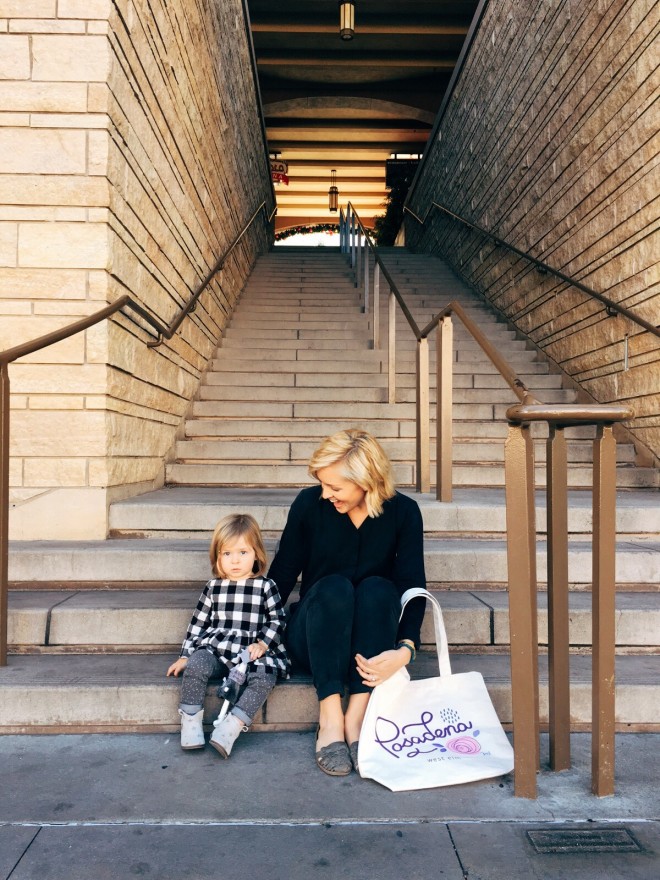 Parker was born the beginning of April in 2014 and Aaron wrapped his season at Ellen the end of May, so when she was about 8 weeks old we were both at home with her which was awesome.  I took my first styling job after having her in mid-July which worked out perfect since Aaron was home to take care of her.  She was about 12 weeks old at that point.  That was my first time having to pump on the go and it was inconvenient to say the least.  I borrowed a friend's battery operated pump and found out in a mall parking structure that my tubing and phalanges weren't compatible whilst already uncomfortably full.  It definitely got easier, though.  The hardest part of being on set and pumping is when you're on location with only one crew bathroom and you're like, "Sorry guys!  I'm going to be in here for a solid 15 minutes and please do your best to ignore the crazy noises coming from the machine that is currently strapped to my bod. Thanks!".  I did a few styling jobs that summer while Aaron was off and also got back into posting here more regularly.  Then August came, Aaron went back to work.  We had planned for Parker to start at an in-home daycare at six months, which was the beginning of October, so I still had two months to do the juggle of trying to do blog work while she was asleep and then having my mom fly out when I had styling jobs .  (Yes, my mom is amazing and I love her!)  I had a couple of babysitters that I really liked and use them on occasion-- like four hours here and four hours there, but was still pretty selective about the jobs I was taking at this point.  I remember when I would be out prepping a job and my mom was here, I would be so looking forward to just leaving the house 5 minutes early and getting a latte all by myself!  It felt like such a treat and a nice reprieve.  There is a part of me that feels like the proper thing to do here is talk about how guilty I feel leaving her and how hard it is, but honestly, I really don't feel guilty and it isn't a hard choice to leave her for a handful of hours a day to do work.  Is it hard when she doesn't want me to leave and gets upset?  Absolutely.  But 5 minutes later, both of us have moved on. I hope that doesn't make me sound like a bad mom.  I adore my daughter and I treasure the time I have with her.  She is my biggest source of joy and I am beyond grateful that she is mine, but I just don't believe that my working outside of the home lessens any of that.  (I take 1-2 days off completely during the week so that we have days that are just the two of us.) I've digressed on our journey, though.  Enter October 2014 and full-time childcare... 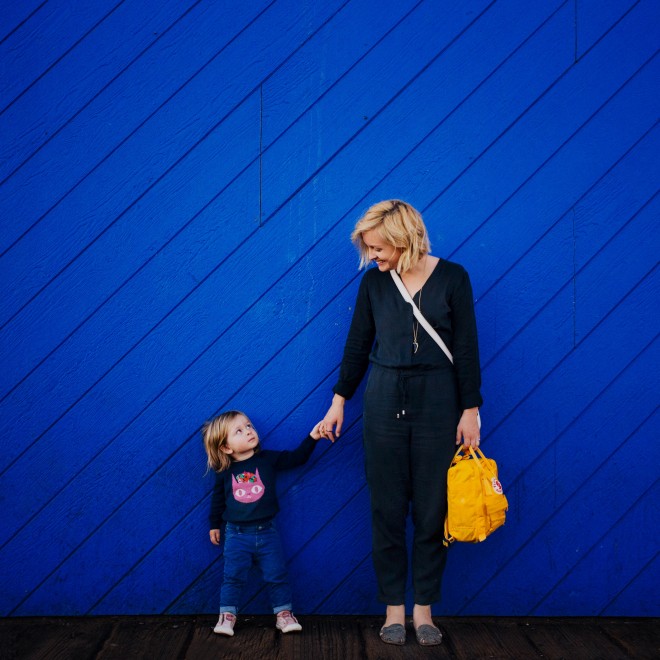 Here were the pros of our in-home daycare situation (which we found through a recommendation of a friend who also sent her little boy there):  It was incredibly affordable-- $180 a week and she could have gone from 7am-6pm, 5 days a week.  (Though she was never there that long, it was still a really, really good deal-- especially in Los Angeles.)  We really liked the woman who runs it and the other kids there.  I love that it felt "homey" and not like a "center" since she was still pretty young.  We loved that she was going to be around other kids for the socialization aspect, which would have played a bigger part when she was older.  Then there were the cons.  It was a 20-25 minute drive each way which amounted to an hour in the morning and an hour in the afternoon by the time I drove there, dropped her off, and drove home.  It wouldn't have been so bad if Aaron was able to do half of it, but with his travel schedule I was the one keeping the road hot.  She was also getting so sick.  This pretty much trumps every pro and any other con.  In theory I knew it would happen.  I expected it.  But the reality of a baby who was sick every other week and not sleeping because she was sick began weighing on us pretty quickly.  There are a lot of times when my job is flexible, but when I'm needed on set that's not the case.  So suddenly we were finding ourselves scrambling for babysitters on the days when she was too sick for daycare and the logistics of it plus a husband who travels a lot and a sick baby were more than this mama could handle.  We lasted in daycare for four months and in February of last year hired a nanny, whom we adore!  I pretty much just consider her part of the family now.  She is a GODSEND.  There are so many things we love about her.  She has a lot of energy and is super interactive with Parker, singing and reading constantly.  They do lots of fun little craft projects and go on nature walks where parker stuffs her pockets with leaves and things she finds along the way.  They've made friends at the neighborhood park (they walk there, our nanny doesn't drive), so they have regular play dates with four or five other kids which is fun for her now.  Her favorite friend from the park is by far this sweet little boy named Arthur.  (Now she requests a baby brother named Arthur too.) She makes Parker yummy meals and keeps the kitchen very clean and the house tidy. 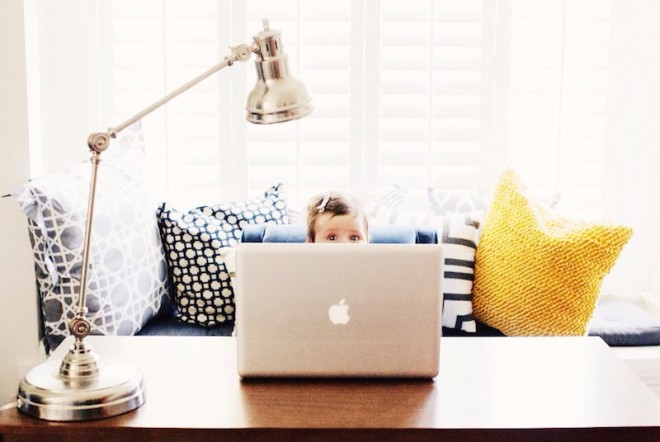 (in case you wondered who was really running things around here, see above...)

The only con is that it's definitely expensive, and we aren't even paying at the higher end of the scale.  But you are hiring an employee essentially, so it's costly.  I've heard of people doing nanny shares which seems like such an awesome option.  My work is just sporadic and I don't keep typical hours, so it wouldn't be practical for me to try and share a schedule with another family.  Also, if either Aaron or I worked a normal job that had things like sick days, daycare could have still been a great option because when she was sick we could have just stayed home with her, but neither of us was in that situation.  One thing I did in order to make this option more affordable was to restructure the hours that I work.  For starters, I won't work more than 4-5 styling days a month any more.  I pretty much have my existing clients that I love and work with a few times a year and don't take on anything else.  Those days are just long and inflexible and as the blog has grown, I've become able to put more focus on it, which is wonderful since my schedule with it can be extremely flexible.  Our nanny typically comes Mondays, Tuesdays, and Thursdays from 8:30-3:30 or 4:30.  On Wednesdays and Fridays I catch up on work during nap time and after she goes to bed.  There are weeks when I'm styling, though, and our nanny will come for longer hours and so far she has always been very flexible with that.  When I'm not styling I do a lot of work once Parker is asleep.  Even that is hard, though, because I still feel guilty if I'm working every night and not spending time with Aaron.  If Aaron is traveling, I'm working every night.  Will I always work?  I think that I will, but you just never know what circumstances will change.  It's really hard for me to imagine not working in some capacity.  My mom stayed home with us for a lot of our childhood and I loved that.  (She worked when I was preschool age and again when I was in high school and college, but was home for the bulk of our school years.)  I really love what I do and I hope that Parker will some day find a career that she loves and is passionate about, too.  There are sacrifices and it's an added challenge to arrange all of the pieces of each day, so that they fit, but it's working for us right now.  If the goal is a happy and healthy family, then our current situation is most definitely meeting that goal right now, but if there came a time where that was no longer the case, then we would have to re-evaluate and shift things around again.  I also believe so intensely that every family is different, every situation is different and every child is different, so we all have to navigate our own paths with our own intuition.  I do think you have to keep trying things until it feels like the fit is right.  Daycare just didn't feel like the right fit for our family given all of the circumstances of our jobs.  For other people, it may be the job that doesn't feel like the right fit and you may have to try to go part-time or working from home or changing career paths all-together.  Keep trying different things until it does feel like a fit and like everyone is happy and well-cared for... including you, mama! 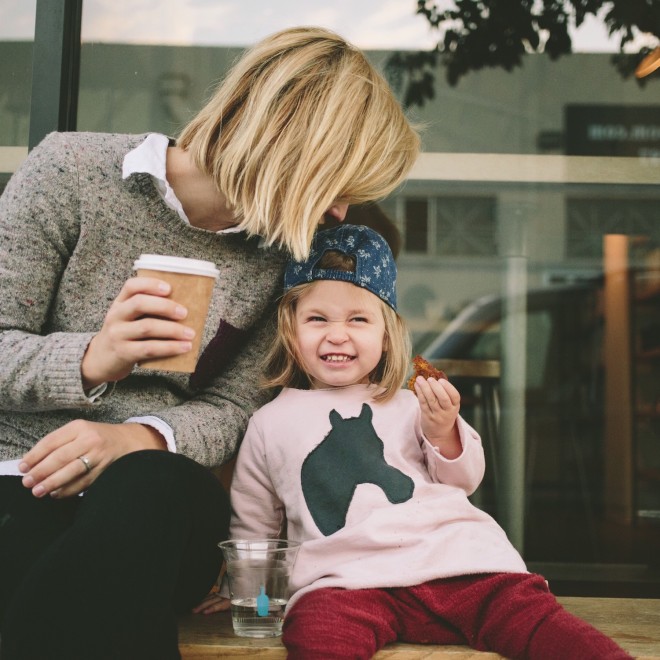 Mamas out there reading this, what has working life and childcare looked like for you?  What has worked and what hasn't?  Feel free to leave any other questions you have on the subject in the comments-- I'm an open book!

Be sure to check out the other posts on this subject from Emily, Amy, Sarah, Erin, Hilary, Alex, Rebecca, Sam, and Caitlin.