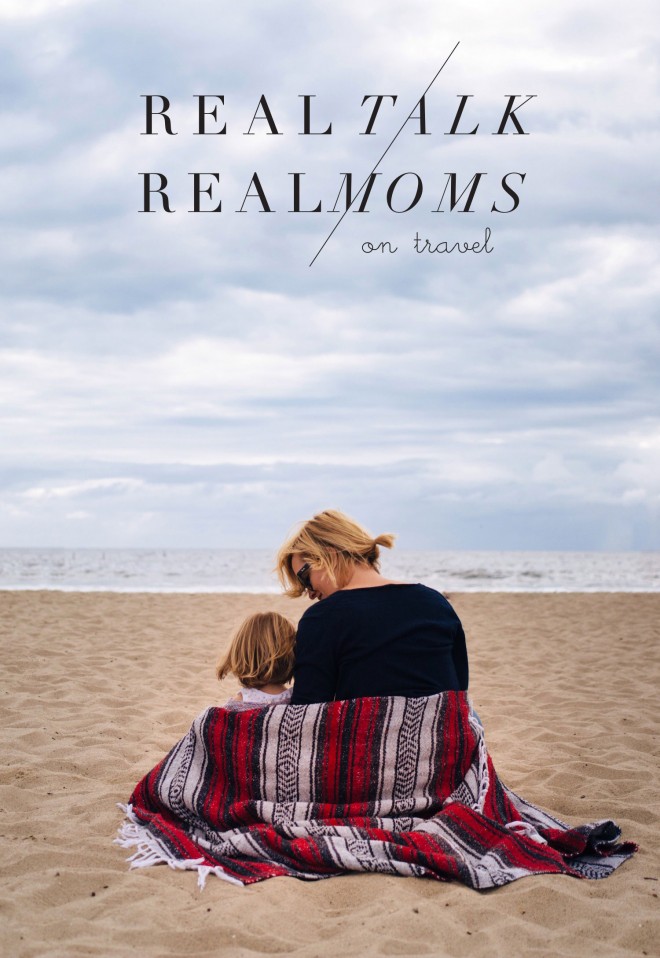 It didn't seem right to enter the holiday travel season without touching on the hot topic of travel with a baby or toddler, so that's what this third part in our Real Talk with Real Moms series is all about.  (I have to admit, I'm really excited to read the other tips from Sam, Alex, Hilary, Erin, Caitlin, Rebecca, Sarah, Emily and Amy as well!)  Parker and I actually flew to Austin on Monday of this week, so it was perfect timing to assess what worked and didn't work.  She has taken 15 flights in her 18 months of life and I've flown with her solo for more than a few of those and have never thought anything of it. This weekend, though, I actually admitted out loud to Aaron that I was a little nervous about how it would go at this 18 month mark.  She is loud and opinionated and on the move constantly!  Luckily, it actually went totally fine.  We had just two small and very short-lived meltdowns.  (One because I accidentally poked her in the eye.  True story.)  Also, the i-pad died about an hour into the three hour flight and we still survived with our dignity intact so I would call that a strong win!  Here are some rules that I live by been flying with a toddler:  (I will let some of the other mamas with younger babes take the lead on flying with infants.) 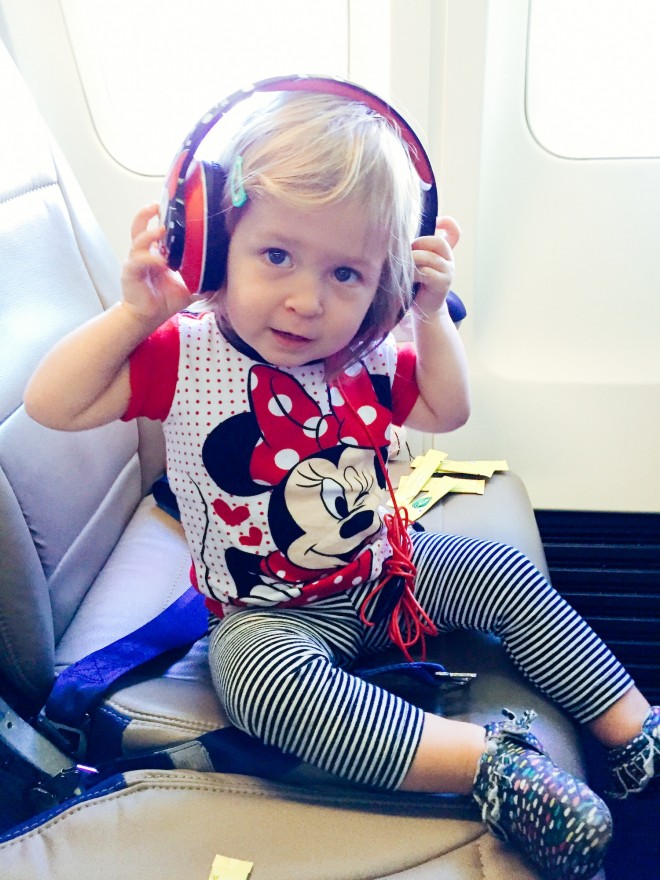 1. Come prepared with snacks.  I can't think of a better way to make a toddler happy than food.  Or at least my toddler.  Pack the favorites and also some new things that they might find exciting.  For this last flight we had one plum, two food pouches, Annie's cheddar crackers, hummus, Terra sweet potato chips, and a Kashi blackberry breakfast bar.

2. Bring their favorite water cup.  This sounds like a given, but it's so easy to forget when you have so many things to pack!  Parker has never had issues with her ears when flying, but I still get her to drink water when we are taking off and landing.

3. Consider wearing your baby.  The Ergobaby 360 is the number one thing that I can't travel without.  She can face out to see what's happening and then I can turn her in when it's time for a snooze.  The Ergo was literally the only way I could get her to sleep on planes when she was really little and now it's the only way I can travel with her by myself when she wants to be held and I'm managing all of our stuff. 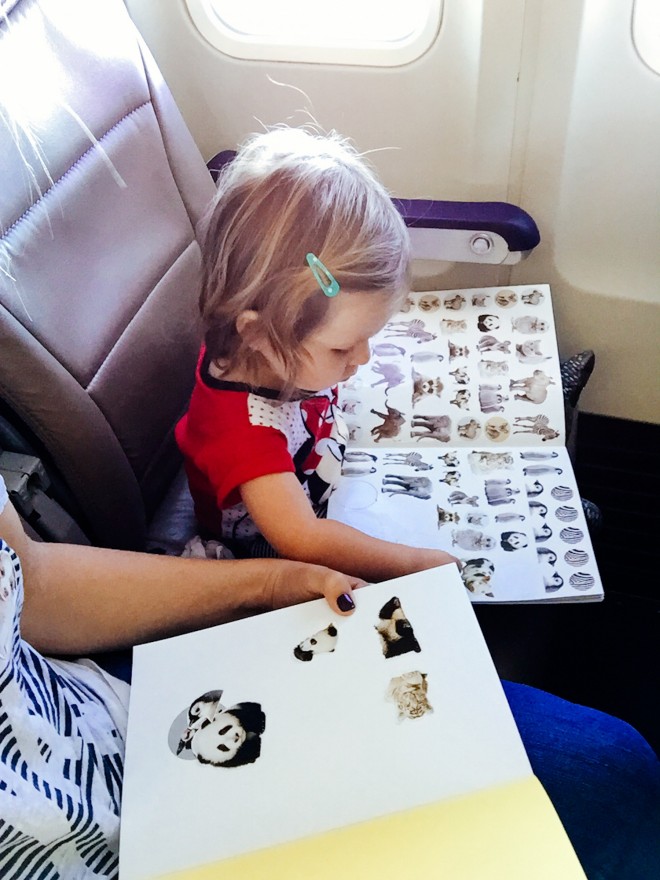 4. Have an activity plan and consider throwing in a new activity to spark their interest.  I bought this baby animal sticker book before our Austin flight and waited until we really needed it to break it out and you know what it resulted in?  30 minutes of airplane fun, friends!  (Which is like 2 hours of on-the-ground regular fun.)  The rest of our plan consisted of a blank notepad and crayons for coloring, 2 of her favorite books, and the trusty iPad.  It's full of some episodes of Daniel Tiger, but honestly she mostly enjoys just clicking in and out of apps more than anything.  That kills more time than any video.  Also there are these really simple games called Peek-a-boo Barn, Peek-a-boo Fridge, and lots of others that are cute and keep her interest for a bit.  Don't forget to bring headphones for any videos they might want to watch!  We bought these for Parker and they're a hit!

5. Extra clothes.  This seems like a no brainer, but we went through 3 outfits on Parker's first flight!  It was so unexpected!  I was literally just digging random articles of clothing out of what was my massive newborn diaper bag at the time.  Now I always pack two extra changes of clothes.  Some people recommend packing an extra shirt for mom too in case you end up with some of your child's bodily fluids on you, but I have never done that.

7. Know your child and book your flight accordingly.  The fussiest flight we ever had with Parker was a 45 minute jaunt from Phoenix that should have been a breeze, but we took a 5 pm flight, so her nap was in the car and short and she was just over it by the end of the day.  Everyone is happier and more enjoyable when I book morning flights.  (But I mean not too early. Nobody was happy when I booked the 5:55am flight.  Oops.)

8. Before I ever get out of the car, I have my credit card and id in my pocket already.  It's so much easier than digging in my bag to find my wallet, to then dig out what I need at check-in, security and when making purchases.

9. Lots of hand wipes.  Planes and airports are just dirty and kids touch everything, so I like to do a wipe down every once in awhile and definitely before snack time.

10. Consider flying during non-peak times of the year for the chance to have an extra seat.  Our flights over the summer were jam-packed, but on the flight out here this week, Parker and I had a whole row to ourselves!  The same thing happened when we flew here last spring and it's such a game changer to be able to spread out.  When Aaron and I both fly with her, depending on the cost, sometimes we buy her a seat just so we know we can have the whole row. (She's currently still under two.)

11. Try to pack as little as possible.  If you're flying to see family or friends, ask ahead and see if they have a pack and play and stroller you can borrow.  If not, it might be worth a $20 umbrella stroller purchase to not have to deal with checking yours.  Especially if you plan on making multiple trips to this destination.  Also, check to see if you can rent anything you need while there. 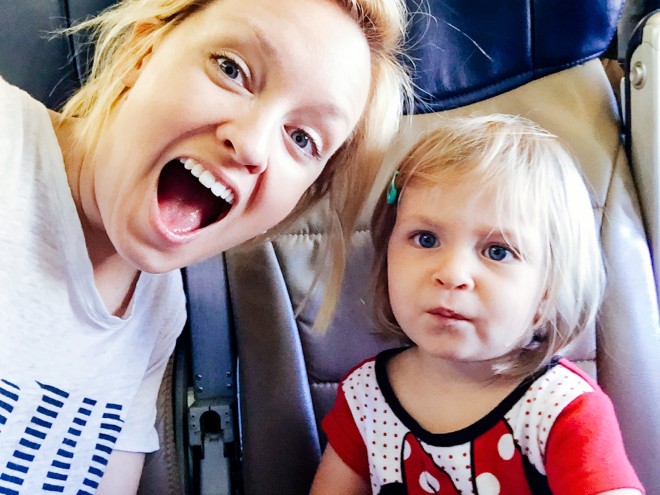 12. Stay calm!  Your energy is contagious and if you're having anxiety about the flight, your babe will totally pick up on it.  If they start to get worked up, stay calm!  They aren't the first baby to ever lose it on a flight and they won't be the last.  Do your best, but try not to stress.

« My Style // Indian Summer, Fall Wardrobe
My Style // One Look from Day to Night »