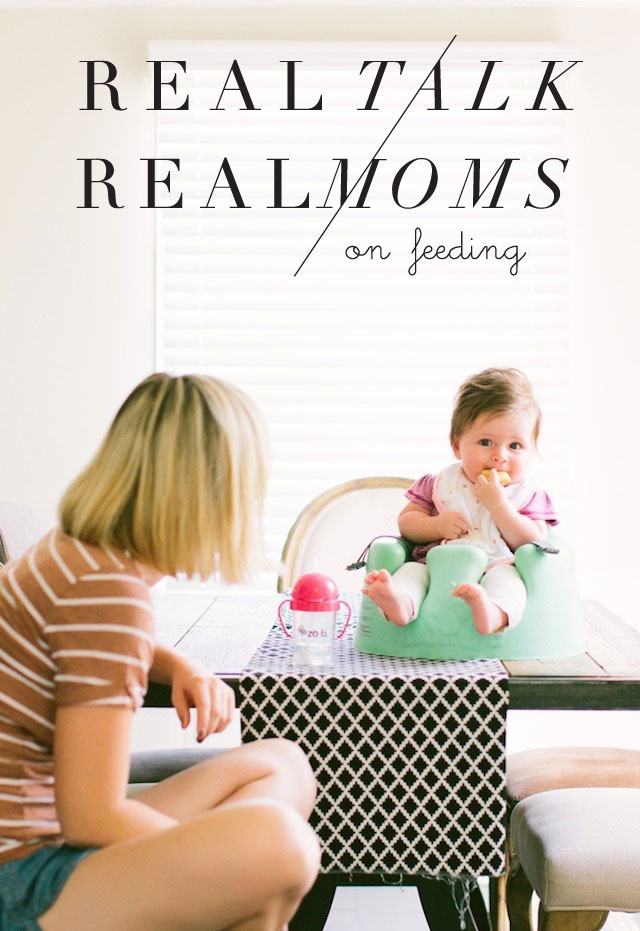 In the great wide world of babies, there is perhaps no more hotly debated topic than how you should feed them.   The decisions are endless and I definitely felt the pressure to be the breast-feeding-until-two-all-natural-organic-gardening-mama who grows her own food and cooks it all up in her own always spotless kitchen, but that was definitely not our exact journey. Today our wonderful group of mamas, including Amy, Erin, Alex, Hilary, Caitlin, Sarah, Rebecca, Sam and Emily are talking about our journeys in feeding these sweet babes we adore, because, I mean, you have to do it.  (If you want to see our stories on sleep, click here!)  The topic can become quite the rabbit hole, so I'm breaking this post into 4 sections: getting started, going back to work and pumping, starting solids, and introducing formula.  (Oh, and if breast pumps aren't your favorite accessory, I don't blame you.  You might prefer this post or even this one!) 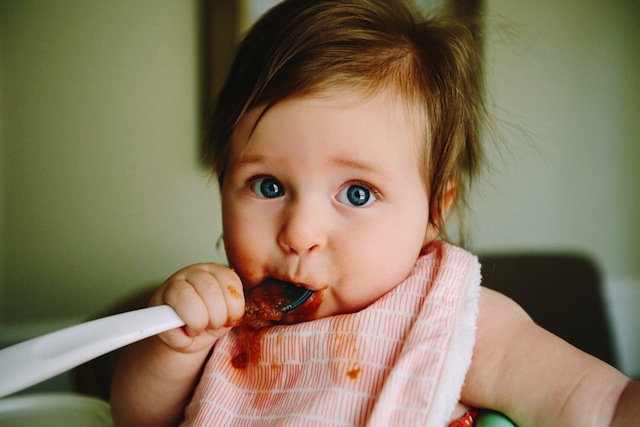 Getting Started // Some time during the course of my 37.5 hour labor with Parker, she aspirated meconium and was thus rushed up to NICU right after she was born.  We had one sweet moment together and then she was whisked away.  I delivered at 6:30pm and was exhausted.  I had also lost a lot of blood and for whatever reason, it took about 12 hours before I could stand up without immediately feeling like I was going to faint.  Around 2am, we got a call from NICU which was one floor above us saying  that they needed to give her a bottle.  I knew from the breastfeeding class I had taken that babies come into the world with enough food in their bellies for 24 hours, but I also knew the doctors had been working to clear her system of the meconium and didn't know if that might be why she needed to eat.  I'm also not of the school of thought that formula is the devil, so with that in mind and in my extremely delusional and exhausted state I said okay.  The next day we began our breastfeeding journey.  She had trouble latching right away, so we used what is called a nipple shield-- something she ended up needing until she was 11 weeks old and could finally latch on her own.  It took about a week to wean her off the formula completely because she was used to getting more from the bottle than I was making before my milk came in.  I was pumping every three hours at this point to get it to come in and get my supply where it needed to be for this hungry little creature I had just given birth to.  I was pumping after multiple feedings a day for this same reason until she was about six weeks old.  It was great because it gave me a good freezer stash to work with for when I went back to work and started traveling, but such a pain to spend time connected to that machine and cleaning it's parts multiple times a day.  I have often wondered how much easier our journey would have been if she hadn't had to go to the NICU and wasn't given a bottle so early, but I guess we will never know the answer to that one.  If you're in the LA area, I would totally recommend checking out the breastfeeding support groups at The Pump Station, whether you're having issues with breastfeeding or not.  It's just a great place to connect to other moms with babies the same age and to discuss any challenges that you're having in that moment.  I am still friends with a lot of the moms I met when I was there with Parker.  From the moment we were home from the hospital, we started the routine of Aaron giving her a bottle at night.  It was a great time for them to connect and I knew I would need her to be comfortable with the bottle since I would be going back to work at some point.  I pumped during that feeding and that is the milk he would give her the next night. 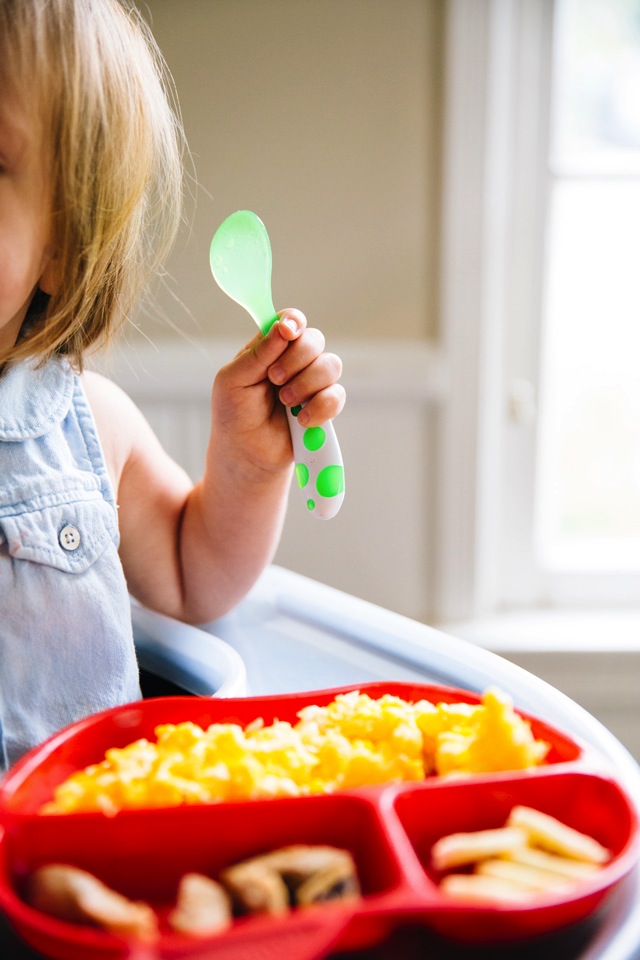 Pumping and Going Back to Work // I took my first styling job when Parker was 3.5 months old.  Aaron was off work for the summer, so he was home with her and it felt like a good time to dip my toe back in the world of the working.  I had a Medela Pump InStyle that I received from our Insurance company, but I borrowed a friend's portable Medela pump (and bought my own tubing and parts for it) when I started back to work.  The battery operated pump isn't quite as strong, so it definitely takes longer and doesn't feel like you get quite as much milk, but I couldn't have continued working and breastfeeding without it.  I have seriously pumped in every place you can imagine-- store fitting rooms, airplane lavatories, in the car while parked in a parking structure, in the car driving down the 101, and the list goes on.  Someone along the way recommended freezing the milk in 2 ounce quantities which seems like a lot of extra work, but it was great advice!  Then you can always defrost what you need without defrosting too much and having it go to waste.  When I traveled, I always requested a refrigerator in my room when I booked the reservation and made sure that was possible.  The struggle to pump on set and usually on location where there might only be one crew bathroom that everyone was sharing was very real, but at the same time I wasn't ready to throw in the towel so I just kept going and trouble shooting whatever situations came up.

Starting Solids // This was something I was so excited about! Parker showed a lot of interest in food pretty early on-- grabbing at what we were eating during meals and trying to get it to her mouth. I read Baby Led Weaning and loosely adopted that strategy. I say loosely because I did still give her some purees from time to time, but real solid foods were our primary focus and no foods were off limits. Sometimes a pouch is just so convenient, though! If you're getting ready to start solids, I would totally recommend reading this book. I will say that I happen to have one of the few pediatricians who encourages BLW, but have heard that most are anti for choking or allergy reasons-- neither of which has been an issue for us. She has really been a pretty great eater from the beginning. A lot of people said that would change as she got older, but so far we've been pretty fortunate in that department. Fingers crossed it stays that way! The only food we've discovered that she won't eat are raw red onions-- but I can't really blame her for that one! 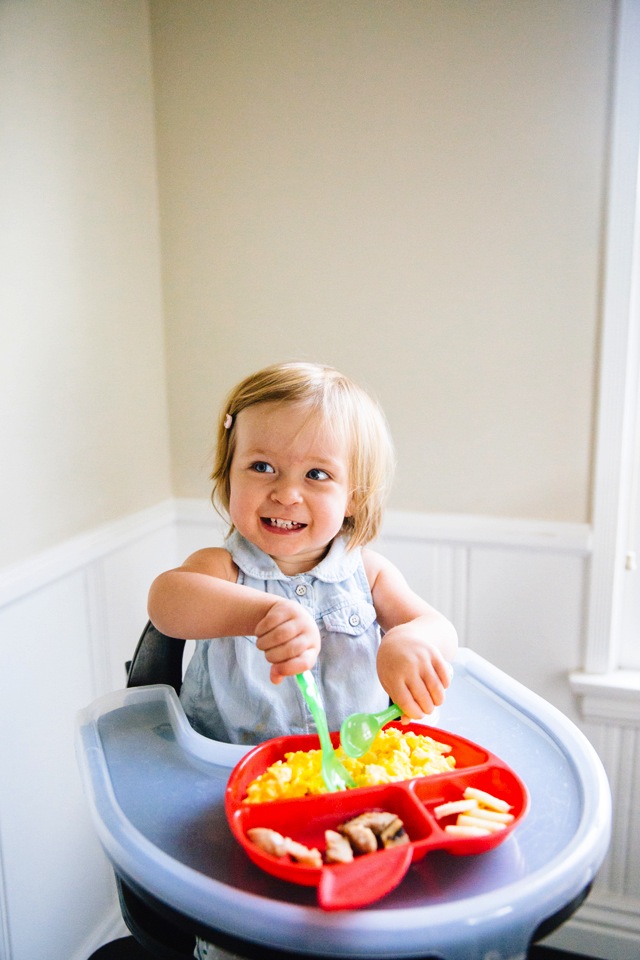 Saying So Long to Breastfeeding and Introducing Formula // At 7.5 months I introduced formula for the first time since that first week of life. We were traveling to Austin and I really didn't want to worry about pumping while I was there. She was used to getting a 6 ounce bottle at night before bed, though, so while I was in Austin I would nurse her and then top her off with two ounces of formula. I was also just not pumping as much milk as I used to. I was still pumping every night, but two or three nights a week she was getting a formula bottle and then I was combining the milk I was pumping for her other bottles. This went on until 9 months when she decided to wean herself from nursing. For the first two days, I kept offering to nurse her and pumping instead when she wasn't interested, but after that I officially threw in the towel. We had had a good run and I just wasn't going to be pumping around the clock for the next three months. She transitioned seamlessly and I got over the totally unnecessary mom-guilt within a week.

I tried to keep this somewhat short and sweet since it would be so easy to fall down the rabbit hole of details, but if you have any questions about anything, please feel free to ask! Did anyone have the magical breastfeeding experience where everything just works so easily and you never have to pump? That's my dream I'm praying for for baby #2!

« Pomegranate and Plum Yogurt Parfaits with Sasha Wilkins
Traveling with Kids: How To Pack for Two »