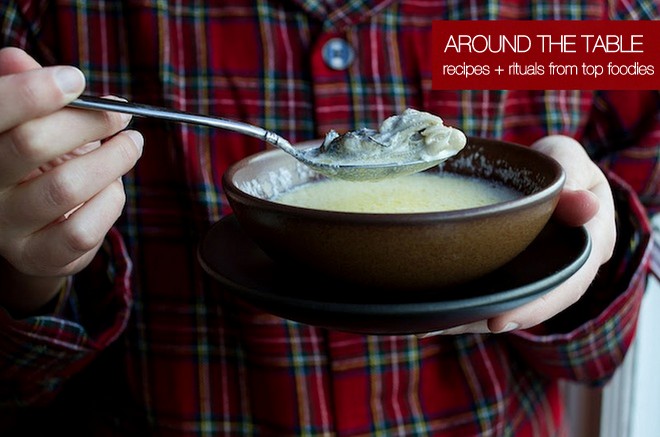 Are you all familiar with Amelia's blog, Bon Appétempt?  If not, you should be!  It's a personal favorite of mine and just this year was named one of Time Magazine's Top 25 blogs.  I literally made audible noises of excitement when she agreed to be a part of this series.  Before we can continue, though, with her delicious recipe and game-filled Christmas tradition, I have to confess something.  I have never eaten an oyster.  Not one.  I have tried just about everything, even escargot, but have never been able to talk myself into these slippery little suckers.  It's a shame, right?  I have found myself surrounded in life by oyster connoisseurs and can talk the talk with ease.  I can even tell the west coast ones apart from the east coast ones by there rougher shells and can let you know that the east coast ones will be brinier and a bit salty when compared to their west coast counterparts, but I have never tried a. single. one.  Thus, today, I am making an end of the year resolution to not let 2012 expire without changing this little fact.  I have a feeling it will be in the form of this delicious dish! 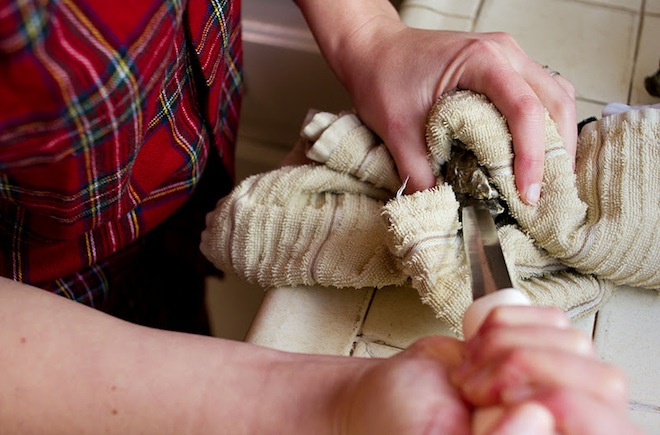 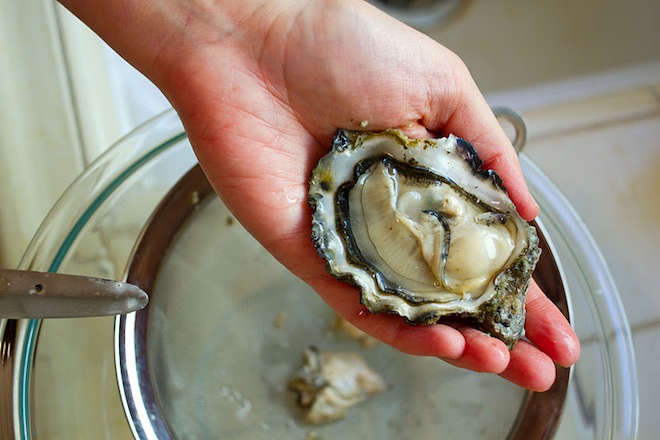 Where will you be spending the holidays this year?
As much as my husband Matt and I would love to go home to Pittsburgh (and get a little taste of the winter we grew up with), our jobs keep us in Los Angeles for the holidays. Though don't feel too sorry for us. L.A. clears out a bit over the holidays. Suddenly, everything is super quiet and there's no traffic. It's quite a treat.

Who cooks? Is it a group effort?  Does one person always do it?
Last year, when it was just the two of us, it was a pretty sweet team effort, particularly Thanksgiving. Matt took care of the chicken (turkey seemed like a lot for two people), gravy, and brussels sprouts, and I made the mashed potatoes, stuffing, and pie. In the past though, when I've gone home, it's a two-woman show: my mom and grandma, the latter of whom is going to be 94 in December, and up until two years ago still made the turkey. Yes, she's amazing.
Do you enjoy cooking for large groups of people?  Do you have any tips to make it less stressful?

I enjoy menu-planning for large groups of people, but I'm still working out the kinks of actually cooking for a lot of people. Timing is always tricky, but when I get stressed, I try to remember how much I love being a guest at other people's homes. I'm always just happy to be there, eating and chatting with friends.

Are there any holiday traditions or games among your friends or family members?
Matt loves Monopoly, and would play it any day of the week. On Christmas, I usually oblige him one game. (I know, I'm a really good wife.)

What's your go-to meal that you will be making this year?

I love oysters, but you know, they're expensive and kind of a hassle. That being said, the holidays are the one time of year it's really OK to spend money and shuck oysters in the middle of the afternoon, so that's probably what I'm going to do. But since I know they aren't necessarily everyone's cup of tea, I'm going to throw some of them into an oyster stew. Whether you are an oyster fan or not, this stew is  pretty much undeniably good. I can't wait! 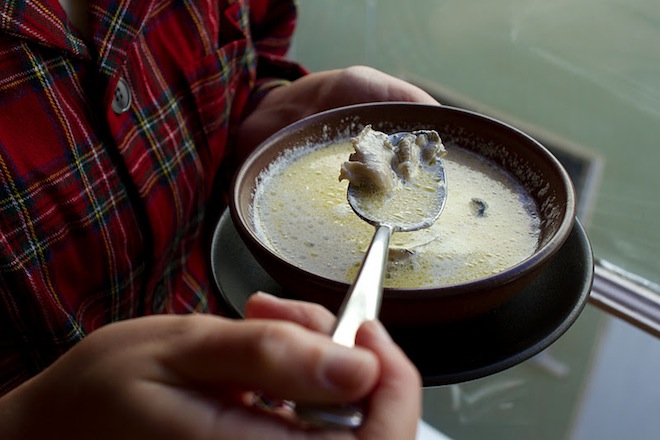 Oyster Stew (with mashed potatoes) adapted from Andrea Reusing’s Cooking in the Moment
serves 2
4-5 small to medium Yukon gold potatoes
10 salty oysters, freshly shucked and liquor reserved
1 cup half and half
3 tablespoons butter, at room temperature
¼ teaspoon kosher salt (more ore less depending on the saltiness of the oysters
Pinch of cayenne
Freshly ground black pepper
Wash and scrub the potatoes, and then place them in a large stockpot. Cover them with water and a pinch of salt and bring the pot to a boil. Boil the potatoes until fork tender. (I just keep checking on them with a fork after about 10 minutes.) Once they’re tender, strain them and then return them to the hot pot. Mash them up with a scant ¼ cup of the half and half, 1 tablespoon of the butter, and salt and pepper to taste. Cover the pot with a lid to keep the potatoes warm while you make the stew.
Strain the oysters, reserving the liquid. (I put the oysters over a strainer and freed them of shell fragments before placing them in a prep bowl until they were ready to add to the cream.)
Heat ¾ cup of the half and half in a heavy nonreactive pot to a low simmer over medium heat, being careful not to let it scorch. In the meantime, warm two small bowls, add 1 tablespoon of the butter to each bowl, and set them in a warm spot.
Season the cream with the salt, cayenne, and black pepper. Add the oyster liquor and return to a simmer. Add the oysters and cook for 30 seconds, until they start to curl and are just heated through. Adjust the seasoning, and divide the oysters and sauce among the warm bowls. Serve alongside the mashed potatoes, spooning the potatoes into the stew or vice versa, whenever it strikes your fancy.