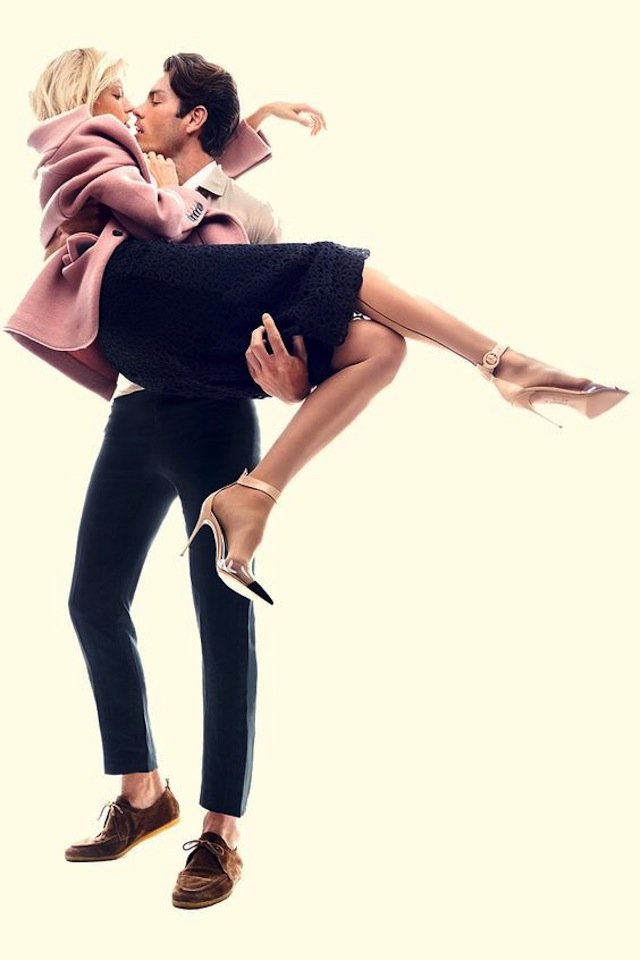 Do you believe in fate? Soul mates?  Aaron and I met at work-- even though I always said that I would never date anyone I worked with!--but I kind of think that even if I hadn't taken that job or if he had moved to another city instead of staying in LA and coming to work for Ellen, we still would have met at some point.  One day, after we were already married, we were driving down the 405 and passed a Best Buy right off of the highway.  I told him that two days after I moved to LA, my dad and I went to Best Buy to buy a TV and Paris Hilton was there signing copies of her album.  That moment stayed with me because it felt "so LA" to walk into a Best Buy and a pseudo celebrity be there doing a meet and greet.  Aaron laughed and told me he had actually been there that night covering the event for MTV News, his job at the time.  Did our paths cross that night and we didn't even know it?  What if someone had told me then, "The guy you're going to marry in four years is in this store right now."  It's kind of crazy to think about! I thought to celebrate tomorrow's day of love, it would be fun to hear from some married ladies about their favorite dates, what they love most about their husbands, and the advice they would give to single ladies everywhere! (See below!) 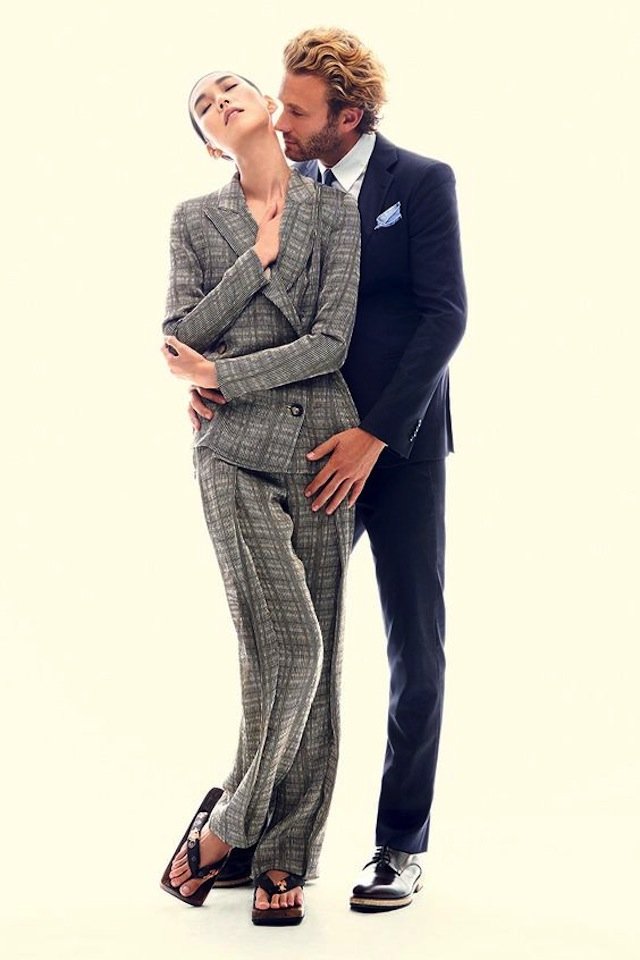 What's the best date you've ever been on?

Amy, works at warby parker, married for 5 ½ years : i absolutely love surprises and one time eric told me to meet him at grand central on track 37 at 6:30pm with an overnight bag. we took the train upstate, drank wine and got off in cold spring. ate dinner at our favorite local spot, stayed in a quaint bnb and then he asked me to marry him that night on a bench along the hudson river. completely unexpected cause he does creative and thoughtful things like that all the time. so yea, that's probably my favorite date i've ever been on! #totalsap

Janet, mom / minister / fighter for justice, married almost 19 years: I know this may sound cheesy but my husband’s and I’s first date was my favorite date we went on. We were in Frankfort Germany and he came to my hotel room to pick me up. We went out to dinner in a little area nearby and had amazing German food and then walked out by the Rhine River and talked and talked and talked and he actually asked me to marry him, but because I had only known him for a short time…I told him no because I didn't even know his last name. it was actually the most amazing time of my life and I truly knew that I wanted to spend the rest of my life with him…even if I didn’t know his last name.

Catherine, stylist / blogger, married for 7 years: Don't tell my husband but before I met him, when I was in college, this other guy took me to the Rainbow Room for dinner in NYC and a whirlwind tour of the city that had us hopping all over the different neighborhoods til morning. It was one of those magical New York dates.

Sueann, director of operations for AdoptTogether, married 6.5 years : This is a tough one! Probably our date to the hospitals when our girls were born 🙂

Hannah, marketing, married 4.5 years: My favorite dates with my husband consist of us making dinner together at home! We don't get to spend too much downtime together, especially at home, so when we get the chance, it's just the best!

Min, traditional foods teacher and mom, married for 24 ½ years: Probably one of our first dates - we met on a 3 week long trip to the Holy Land. At the end of a long day of touring, the two of us went down to the Sea of Galilee. There was no one around, and after a quick swim, we sat, talking and watching the sunset. We held hands for the first time. Still gives me butterflies.

Kylie, producer, 5 years in October: Surprise flight to Paris, dinner at Maison Blache, and dancing on the Seine.  That was the night we got engaged, although the night was also a total disaster!

Michaela, actor, married since July 3, 2011, 4 and a half years: It would have to be our first. We sat at a cozy candlelit dinner at a romantic little restaurant. You know when you have in your head an idea or a fantasy of who you hope the guy is going to be before you really know them? Well, at that dinner, Mike proved to be exactly who I'd hoped he'd be. I knew on that first date that someday I'd marry him. It was crazy and lucky and wonderful.

What's the best character trait in your husband?

Amy: patience. so much patience. and kindness and wisdom. he's like a unicorn really! i totally married up 🙂

Alex: His humor! It was one of the things that attracted me to him most. I can't imagine living life without a lot of laughs and smiles.

Janet: His quiet confidence and wisdom. It was one of the things that I was attracted to about him. [plus he was rock n roll and road a motorcycle!]

Catherine:  His sense of humor!

Sueann: Generosity. He has shown it beyond gifts and money. He's generous with time, forgiveness, patience when I am exasperating, humor and is ready to laugh, and he's generous with who he is. He offers himself - all of who he is- to others and doesn't hide.

Min: He loves to serve others. That's the first thing I noticed before I started dating him. Whenever his mom would ask him for assistance, he would happily do anything for her

Kylie: His sense of humor! (and he's pretty romantic too.)

Michaela: Mike is such a nurturer. It was one of the first things I noticed about him. When we started dating, he had this beautiful husky malamute mix named Andy that he'd had for eight or nine years and he considered his best friend. Watching him take care of this sweet dog, seeing how attentive he was, and how deeply he loved this animal -- I saw what a kind, tender, sensitive soul he had. I watch him with our son, Gabriel, and it fills me with that same admiration.  it's one of the biggest reasons I married him. I knew he would be a good husband and a good father because his natural instincts are to protect, comfort, and support which is so helpful in life when you never know what's waiting around the bend. 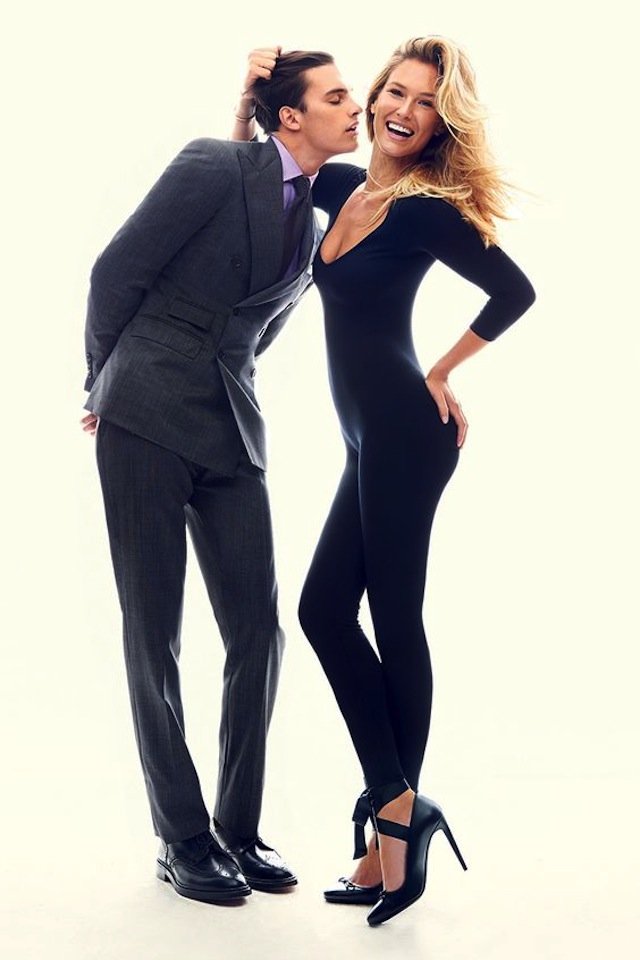 What advice would you give to single ladies everywhere?

Amy: wait for that person that makes you want to be a better person.

Alex: Continue to focus on yourself and healing areas in your life that seem to cause you pain and bring out the ugly in you. Those areas will only be magnified more in marriage. You don't have to be perfect to have a great marriage, but you do need to be committed and ready to work on yourself.

Janet: Don’t settle. There is a lot of life to live with your spouse so make sure it is someone that you LOVE…but also that you really LIKE! 🙂 Don’t waste your dating life on people you know that you have no future with. Relationships are valuable and have meaning and you should date with that in mind.

Catherine: Make sure you know and love yourself before you find your soulmate. It will make your relationship that much richer and more authentic when you do.

Sueann: Continue to be your fully independent, confident, powerful self.

Hannah: Always stay true to yourself, know what makes you happy and go for it!

Min: You need to find and be with someone who respects you and is willing to grow with you, spiritually and emotionally, but don't expect that person to be the one that makes you whole. Only God can do that!

Kylie: Find someone who is a good person, who is good to you, and who can make you laugh!

Michaela: I wasn't expecting Mike to pop up in my life when he did, in fact I thought I had a few more single years left in me. I was nervous because I wasn't completely prepared for that next step, but thank god I didn't push him away. It's so important to follow your heart and let go of the plans your mind made. Your heart will always steer you where you need to go!